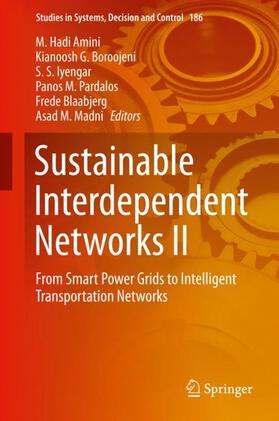 This book paves the way for researchers working on the sustainable interdependent networks spread over the fields of computer science, electrical engineering, and smart infrastructures. It provides the readers with a comprehensive insight to understand an in-depth big picture of smart cities as a thorough example of interdependent large-scale networks in both theory and application aspects. The contributors specify the importance and position of the interdependent networks in the context of developing the sustainable smart cities and provide a comprehensive investigation of recently developed optimization methods for large-scale networks.

There has been an emerging concern regarding the optimal operation of power and transportation networks. In the second volume of Sustainable Interdependent Networks book, we focus on the interdependencies of these two networks, optimization methods to deal with the computational complexity of them, and their role in future smart cities. We further investigate other networks, such as communication networks, that indirectly affect the operation of power and transportation networks. Our reliance on these networks as global platforms for sustainable development has led to the need for developing novel means to deal with arising issues. The considerable scale of such networks, due to the large number of buses in smart power grids and the increasing number of electric vehicles in transportation networks, brings a large variety of computational complexity and optimization challenges. Although the independent optimization of these networks lead to locally optimum operation points, there is an exigent need to move towards obtaining the globally-optimum operation point of such networks while satisfying the constraints of each network properly.

The book is suitable for senior undergraduate students, graduate students interested in research in multidisciplinary areas related to future sustainable networks, and the researchers working in the related areas. It also covers the application of interdependent networks which makes it a perfect source of study for audience out of academia to obtain a general insight of interdependent networks.

M. Hadi Amini is currently a Ph.D. candidate in the Department of Electrical and Computer Engineering at Carnegie Mellon University, Pittsburgh, PA, where he received his M.Sc. in Electrical and Computer Engineering in 2015. Prior to that, he received his B.Sc. from the Sharif University of Technology, Tehran, Iran, in 2011, and his M.Sc. from Tarbiat Modares University, Tehran, in 2013, both in Electrical Engineering. He serves as reviewer for several high-impact journals, and international conferences and symposiums in the field of power systems. Hadi currently serves as the President of Carnegie Mellon University Energy Club. He serves on the technical program committee of "IEEE Int'l. Conf. on Smart Energy Systems and Technologies" (SEST 2019). He has published more than 50 refereed journal and conference papers in the smart energy systems and electrified transportation network-related areas. He serves as the lead editor for Sustainable Interdependent Networks. He is the recipient of the best paper award of Journal of Modern Power Systems and Clean Energy in 2016, best reviewer award of IEEE Transactions on Smart Grid from the IEEE Power & Energy Society in 2017, outstanding reviewer award of IEEE Transactions on Sustainable Energy in 2017, and the dean's honorary award from the president of Sharif University of Technology in 2007. Hadi is a member of IEEE-Eta Kappa Nu (IEEE-HKN) Sigma Chapter, the honor society of IEEE. He ranked 26th among about 270,000 participants in the Iranian Nationwide University Entrance Exam for B.Sc. degree in 2007. His current research interests include interdependent networks, distributed/decentralized optimization algorithms in energy systems, transportation electrification, smart grid, and cybersecurity of power systems.

Kianoosh G. Boroojeni received his Ph.D. in Computer Science. He received his B.Sc. from the University of Tehran in 2012 and his M.Sc. from Florida International University in 2016. His research interests include smart grids and cybersecurity. He is the author/coauthor of three books published by MIT Press and Springer. During his Ph.D. years, he published more than thirty publications in the form of book chapters, peer-reviewed journal papers, and conference papers. He is currently collaborating with Dr. S. S. Iyengar to study some network optimization and security problems in the context of smart urban development.

S. S. Iyengar is a Distinguished University Professor, Distinguished Ryder professor, and Director of the School of Computing and Information sciences and is the founding Director of the Discovery Lab at Florida International University. He has published over 600 research papers and has authored/coauthored/edited 24 books published by MIT Press, John Wiley & Sons, Prentice Hall, CRC Press, and Springer. He is a member of the European Academy of Sciences, a Fellow of IEEE, a Fellow of ACM, a Fellow of AAAS, a Fellow of NAI, a Fellow of AIMBE, a Fellow of the Society of Design and Process Program (SPDS), and a Fellow of the Institution of Engineers (FIE). He was awarded a Distinguished Alumnus Award of the Indian Institute of Science, Bangalore, and was awarded the IEEE Computer Society Technical Achievement Award for the contributions to sensor fusion algorithms and parallel algorithms. He is also a senior Fulbright distinguished specialist award winner. He is a Golden Core member of the IEEE-CS, and he has received a Lifetime Achievement Award conferred by the International Society of Agile Manufacturing (ISAM). Prof. Iyengar is TIMES NETWORK NRI award winner in 2017. He has served on many National Science Boards such as NIH-National Library of Medicine in Bioinformatics, National Science Foundation review panel, NASA Space Science, Department of Homeland Security, Office of Naval Security, and many others. He is also the founding editor of the International