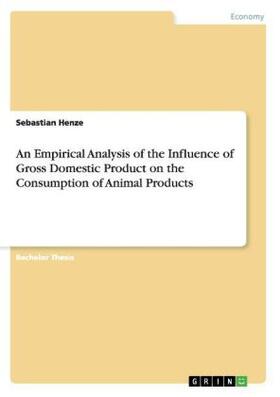 Bachelor Thesis from the year 2013 in the subject Economics - Statistics and Methods, grade: 2,0, Martin Luther University (Lehrstuhl für Ökonometrie und empirische Wirtschaftsforschung), course: Bachelor Arbeit / Ökonometrie, language: English, abstract: Food is a permanently present and pressing topic. This paper presents and evaluates consumption patterns in developed countries and other regions of the world. it derives thus changes and what they mean for society, food safety and security and possible problems and behaviors in the future.

Food is a permanently present and pressing topic in society. From the time where people changed their habits from being gatherers and hunters towards domesticating animals and starting to grow their food instead of collecting it from woods. Through the industrial revolution that changed Europe in a way it was able to satisfy its growing populations' needs for food and nutrition in a way it was never able before. Until today where the number of overweight people on earth equals the one of undernourished ones. An argument for the importance of food safety and security even today.

But the change has not only happened in the availability of foo but also in the consumption patterns, that is in the food basket of households. In recent month Europe became highly aware of the topic when traces of horse-meat were found in else wise labeled meat and other livestock containing products. Even in the products of one of the largest firms in the world, Nestlé, traces of horse-meat were found. Such a wide public outrage and interest in these findings is easily understood. Given that animal products are on far higher demand in industrialized countries than in developing ones- the same findings for example in India might have produced far less of an interest. Taking into account that most people there are vegetarians and almost half of all vegetarians in India never eat fish, meat or eggs and