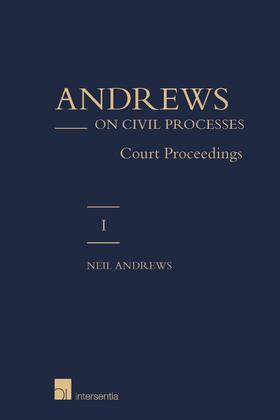 In two volumes Neil Andrews (University of Cambridge) examines civil processes in England and Wales. One of the leading legal jurisdictions in this area of law as many non-resident parties choose to conduct arbitration in London or bring proceedings before the English High Court, notably the Commercial Court. Written in a clear and well-ordered style, Andrews on Civil Processes therefore discusses the most important styles of civil dispute resolution: court proceedings (volume 1), mediation and arbitration (volume 2).

Neil Andrews guides the reader through the practice of dispute resolution in all its major forms: public and private, adjudicative and conciliatory. The subject-matter has been split into two volumes to provide specialists with a choice, but the two volumes are of course complementary. They provide a complete picture of the court and arbitration systems, and of the developing technique of mediation. Advisors seeking further leads are also assisted by detailed citation of primary sources and rich bibliographical references.

Volume 1: Court Proceedings
In England there has been a sustained effort to control court proceedings and render them more efficient. The author explores common legal principles and connections between the court system and the alternative techniques of arbitration and mediation. For example, there is discussion of: the four forms of civil justice (chapter 1: mediation, settlement without mediation, arbitration, and court proceedings); the six phases of court proceedings (chapter 4); the four forms of English multi-party litigation (chapter 22); and the five constellations of procedural principle - advice and access, empowering the parties, conditions for sound decision-making, an efficient process, a fair process, and upholding judgment (chapters 25 to 29).

Most recently, reform of costs was examined by Lord Justice Jackson’s inquiry in 2009-10. This 2013 publication takes the complex set of reforms and changes introduced in April 2013 into account and provides detailed discussion where relevant (inter alia. qualified one way cost shifting, damages-based agreements, and the changes to conditional fee agreements and the system of settlement offers). A convenient survey of these changes is also set out in the introductory chapter of volume 1.