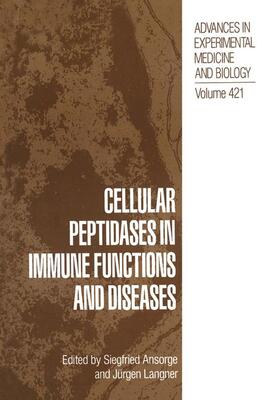 This book stems from a conference held at Magdeburg-Herrenkrug, Germany, in November 1996 on "Cellular Peptidases in Immune Functions and Diseases. " This sympo­ sium was designed to bring together scientists from diverse areas of expertise to discuss issues of newly identified relevance of proteolytic processes and their role as molecular regulators in the immune system and in diseases. The meeting was organized by the Son­ derforschungsbereich 387 of the Deutsche Forschungsgemeinschaft "ZelluHire Proteasen, Bedeutung fiir Immunmechanismen und entziindliche Erkrankungen," which links re­ search groups from the Otto von Guericke University Magdeburg and the Martin Luther University Halle. It has become clear during the last decade that proteolysis, the processing and degrada­ tion of peptides and proteins, has to be considered as a special level of epigenetic control of practically all processes of life and-an understanding dating from the last three years or so--also of cell death or apoptosis. There is also increasing evidence that proteolysis does play a crucial role in all areas of immune functions as well as in inflammatory and neoplastic diseases. Cellular proteases have central functions in natural (nonspecific) as well as acquired in the cognitive phase (antigen processing and presen­ (specific) immunity. They are involved tation), in the activation phase (e. g., generation and processing of cytokines, function of CD26, CD 13, processing of transcription factors) as well as in the effector phase of the im­ mune response (e. g., complement system, granzymes, elastase, proteinase 3.