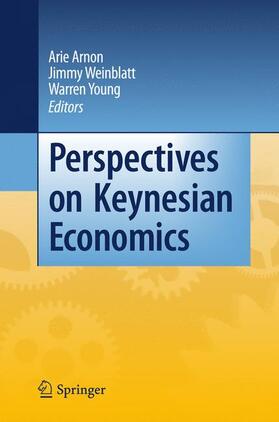 This book combines historical and policy-oriented perspectives on the relevance of the Keynesian approach for economic theory, policy, and crisis analysis. The first part focuses on historical, theoretical, and methodological issues, and puts them in context with current developments. The second part focuses on the application of the Keynesian approach to modeling the economy, policy-making, and analyzing the ongoing crisis of the early 21st century.
Bringing together contributions by leading macroeconomists such as Laidler, Cukierman, Colander and Boyer, and leading historians of economics such as Hollander, Boianovsky, Marcuzzo, Dimand, Witztum, Young, deVroey and Arnon, the book offers a comprehensive overview of Keynesian economics today.
One of the book’s most essential features are the commentaries on the papers, which promote a cross-fertilization between macroeconomists and historians of economics, providing, in conjunction with the papers themselves, a balanced outlook on the current relevance of Keynesian economics.

Introduction.- Part I: History, Methodology, and their Current Relevance.- Making the Most of Anomaly in the History of Economic Thought: Smith, Marx-Engels, and Keynes.- Reason and Reasonableness: Lessons from "The Economic Consequences of th Peace" Ninety Years Later.- The Marshallian Roots of Keynes.- Was Patinkin a Keynesian Economist?.- Keynes, Robbins, and the Nature of Economics.- Keynesianism at Chicago: 1959-1977.- Part II: Models, Pedagogy, Policy, and Crisis.- The Keynesian Revolution and IS-LM.- The Keynesian Method, Complexity, and the Training of Economists.- Keynes, Wicksell, and Active Monetary Policy.- The Consequences to the Banks of the Collapse of Money Values, 1931 and 2009.- The Great Depression, the Current Crisis and Old vs. New Keynesian Thinking: What have we Learned and What Remains to be Learned.- Lucas, Keynes, and the Current Crisis.

Arnon, Arie
Arie Arnon has been professor at the Department of Economics at Ben Gurion University since 1983. His areas of research include the macroeconomics and monetary theory as well as the history of economic thought.Jimmy Weinblatt is Rector of the Ben-Gurion University of the Negev. He has conducted research in International Trade, Economics of Crime, Applied Macroeconomics, Economics of Social Issues (e.g. - minimum wage, economics of non-profit organizations' government's allocation of resource to social budgets).Warren Young is professor at Bar-Ilan University. His research interests are in the History of Open Economy Macromodels, and Early General Equilibrium and Real Business Cycle models.