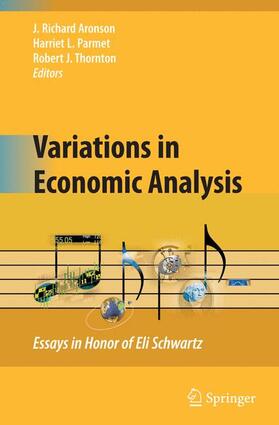 Essays in Honor of Eli Schwartz

For over fifty years, Eli Schwartz has inspired generations of economists through his prolific publications and dedicated in teaching. In 2008, the Martindale Center for the Study of Private Enterprise at Lehigh University invited prominent academics and practitioners—including Nobel Prize recipients, Robert Solow and Harry Markowitz, and former Chairman of the Economic Advisers to Ronald Reagan, Murray Weidenbaum—to contribute pieces that reflect their own approaches to issues that Schwartz has explored over the long span of his career. The twelve original essays cover a range of topics, including tax reform, corporate finance, fiscal policy, banking, economic growth, and globalization, representing a variety of methodologies, including economic theory, econometrics, and case analysis. The collection emphasizes the underlying connections among seemingly disparate facets of economic activity, and underscores the tremendous influence of Schwartz on economic analysis, policy, and leadership today.

My Favorite Two Corporate Finance Puzzles.- The Solvency of Federal Welfare Entitlement Programs: Social Security and Medicare.- The Corporate Sector as a Net Exporter of Funds: Additional Evidence.- Piscal Folicy 101-Economic Policy Meets Partisan Politics.- A Taxonomy of Utility Functions.- Equilibrium and Disequilibrium Growth: a Comment on a Comment.- Reputational Risk and Conflicts of Interest in Banking and Finance: The Evidence So Far.- Seeking Common Ground on Globalization.- Tax Reform Then and Now.- Joseph A. Schumpeter: Not Guilty of Plagiarism but of "Infelicities of Attribution".- Economics and the Tanakh-the Hebrew Bible.- Muted Signals in Academe: Letters of Recommendation and Grade Inflation.

Thornton, Robert J.
J. Richard Aronson is the William L. Clayton Professor of Business and Economics at Lehigh University and Honorary Professor of Economics at the University of York (UK). He served as a Fulbright Research Scholar at the University of York in both 1978 and 1996. Professor Aronson is also the Director of Lehigh's Martindale Center ofr the Study of Private Enterprise and a member of the Employee Retirement Study Commission of the Commonwealth of Pennsylvania. Finally, he is co-editor with Eli Schartz of Management Polices in Local Government Finance for the International City Management Association, now in its fifth edition.Harriet L. Parmet is Professor Emerita in the Department of Modern Languages and Literature at Lehigh University, where she has taught Hebrew since 1976. She specializes in modern Jewish literature, particularly the work of American Jewish women writers and such personalities as Penina Moise, Rebecca Gratz, and Haviva Reik. She has lectured widely in the Lehigh Valley. Co-founder of the Jewish Colloquia Series, Parmet's work has appeared in journals such as Midstream, Journal for Feminist Studies in Religion, Shofar, Holocaust and Genocide Studies, Feminist Teacher, Delos, Judaism, and Jewish Spectator. She is the author of The Terror of Our Days: Four American Poets Respond to the Holocaust. Robert J. Thornton is MacFarlane Professor of Economics at Lehigh University. His areas of research include labor market discrimination, unions and collective bargaining, occupational licensing, and forensic economics. He has written or edited many books and collective volumes, most recently Fundamentals of Labor Economics (2005, with Thomas Hyclak and Geraint Johnes) and Developments in Litigation Economics (with Patrick Gaugan). He is also the author of numerous articles which have appeard in such as the Industrial and Labor Relations Review, Journal of Human Resources, Oxford Bulletin of Economics and Statistics, and the Journal of Economic Perspectives. He has also written the Lexicon of Intentionally Ambiguous Recommendations (Barnes and Noble Books, 2005).