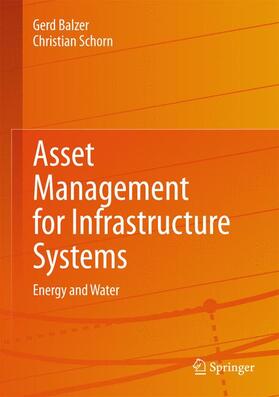 The book offers a broad overview of asset management processes for different utilities, with a special emphasis on energy and water. It provides readers with important practical considerations concerning the development of new competitive structures and procedures for guaranteeing a sufficient supply of energy and water in a regulated environment, using clearly defined technical and economic cornerstones. On the one hand asset owners expect suitable interests from their investment and business growth; on the other hand regulators focus more on a reliable and cost-effective customer supply. This book shows how to take into consideration these different perspectives in the process of designing new structures and how to guarantee organizational transparency. Based on the major tasks of an asset manager, it describes essential principles and boundary conditions for ensuring the optimal use of resources in a network, such as investment and maintenance strategies, equipment service life, investment and operational costs, etc. Moreover, it points out their impact on the organization of the company, including the necessary IT landscape and computer programs. The book is the English translation of Asset Management für Infrastrukturanlagen - Energie und Wasser1, written by the same authors and published by Springer in 2014.

Balzer, Gerd
Gerd Balzer, born in 1946, received his PhD in 1977 at the Technische Universität Darmstadt. He worked seventeen years as head of the electro-consulting department at BBC/ABB. From 1994 to 2011 he served as a Professor for Electrical Power System at the Technische Universität Darmstadt. During this period, he was actively involved in asset management, networking planning, insulation coordination and network integration of renewable energy. He is currently engaged in a number of activities organized by the International Council on Large Electric Systems (CIGRE). Christian Schorn, born in 1964, studied electrical engineering at the University of Saarland in Saarbrucken and at the Karlsruhe Institute of Technology. He has been working at EnBW Energie Baden-Württemberg AG since 1996, holding different leadership roles within the grid segment in Germany and other European countries. He founded and supervised the department of technical asset management, responsible for network planning, technical standardization, budget controlling and policy development for electricity, gas and water at all voltage levels and pressure stages at the DSO Netze BW (former EnBW Regional AG). At the end of 2013 he took the position as Group Expert Grid at EnBW AG. In addition, he is an active member of the International Council on Large Electric Systems (CIGRE).