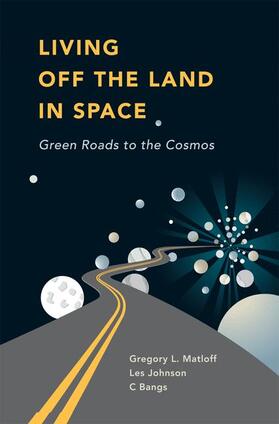 Bangs / Matloff / Johnson Living Off the Land in Space

Green Roads to the Cosmos

Bangs / Matloff / Johnson Living Off the Land in Space

This book presents a visionary concept for future development of space travel. It describes the enabling technology for future propulsion concepts and demonstrates how mankind will ‘live off the land in space’ in migration from Earth. For the next few millennia at least (barring breakthroughs), the human frontier will include the solar system and the nearest stars. Will it be better to settle the Moon, Mars, or a nearby asteroid and what environments can we expect to find in the vicinity of nearby stars? These are questions that need to be answered if mankind is to migrate into space.

The Old Frontier.- The New Frontier.- The Rocket and Its Limits.- The First "Green" Space Technologies.- Probes to the Planets:Where We've Been on Our Journey.- Probes to the Stars:Concept Studies.- Breaking Out into Space:Visionary Futures.- Thinking Interstellar.- Technological Readiness.- Space Brakes("Living of the Land" by Using a Planetary Atmosphere).- The Ion Trial.- The Orbital Steam Locomotive.- Sky Clippers.- Art or Science?.- Space Beanstalks.- Chemical Propulsion for Space Exploration: Good for Yesterday,Today and Tomorrow.- Human Exploration.- Defending the Earth.- Space Miners.- Some Exotic Possibilities.- Sights on Centauras.

At present, Dr Matloff teaches physics and astronomy as an Assistant Professor at New York City Technical College, CUNY. He has pioneered the application of gossamer spacecraft to deep-space exploration and has served as a Faculty Fellow in summer 1999, 2000 and 2001 at NASA Marshall Spaceflight Center (MSFC), Huntsville AL. He has participated there on a design team planning interstellar missions propelled by solar sails unfurled Sunward of the Earth. He consults for NASA through Gray Research and Teledyne Brown, in Huntsville AL.

Les Johnson manages the Science Programs and Projects Office at NASA's Marshall Space Flight Center. In addition to his NASA credentials, Johnson also is an inventor. He holds three patents, including one received in 1989 for a laser-triggered, fiber-optic neutron detector. His most recent patent was awarded in July 2003 for an electrodynamic sail for propulsion. Johnson is also a two-time recipient of the NASA Exceptional Achievement Medal.

Ms Bangs' work is in many permanent collections, including MSFC, the US Library of Congress, the Mint Museum and the Chrysler Museum.