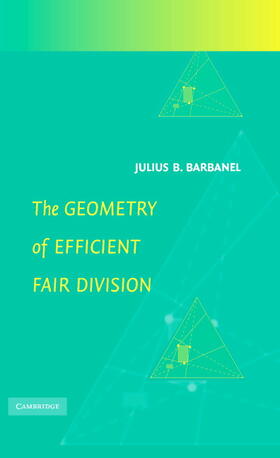 What is the best way to divide a 'cake' and allocate the pieces among some finite collection of players? In this book, the cake is a measure space, and each player uses a countably additive, non-atomic probability measure to evaluate the size of the pieces of cake, with different players generally using different measures. The author investigates efficiency properties (is there another partition that would make everyone at least as happy, and would make at least one player happier, than the present partition?) and fairness properties (do all players think that their piece is at least as large as every other player's piece?). He focuses exclusively on abstract existence results rather than algorithms, and on the geometric objects that arise naturally in this context. By examining the shape of these objects and the relationship between them, he demonstrates results concerning the existence of efficient and fair partitions.

Barbanel, Julius B.
Julius B. Barbanel is Professor of Mathematics at Union College, where he has also served as Department Chair. He has published numerous articles in the areas of both Logic and Set Theory, and Fair Division in leading mathematical journals. He is a member of the Mathematical Association of American, the Association of Symbolic Logic, and the Game Theory Society.