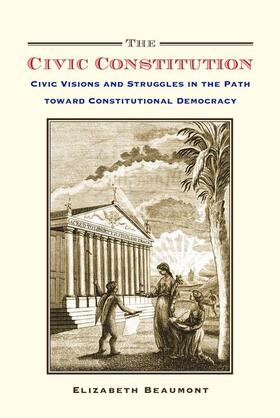 Civic Visions and Struggles in the Path toward Constitutional Democracy

How have generations of Americans debated and shaped the constitutional meanings of liberty, equality, justice, and "We, the people"? What roles have engaged citizens and social movements played in effecting transformative constitutional change? These questions are at the heart of Elizabeth Beaumont's lucid and compelling study. In The Civic Constitution, she traces four crucial eras of constitutional dispute and reinvention: the revolutionaries who
catalyzed the Declaration of Independence and first state constitutions; the antifederalists and other critics who influenced the national Constitution and Bill of Rights; the abolitionists who paved the way for the Reconstruction Amendments; and the suffragists whose battles provoked the Nineteenth Amendment.

Beaumont argues that these groups should be recognized as civic founders-and co-founders-of the U.S. Constitution. Through newspaper broadsides, petitions, convention speeches, sermons, boycotts, and protests, these men and women worked to redefine fundamental law. Challenging established authority, they advocated vital new understandings of popular self-governance, rights, liberties, and citizenship. Indeed, though their roles are often overlooked in contemporary debates, these civic
reformers not only shaped the legal text and terms of modern constitutionalism, but reconstructed the meaning of civic membership, in terms of both norms and fundamental commitments.

The Civic Constitution is a sweeping work of reinterpretation that speaks to students of American politics, history, and law. This richly documented study offers a keener understanding of the Constitution and a more profound perception of civic identity and democracy itself.

Beaumont, Elizabeth
Elizabeth Beaumont is an Associate Professor of Political Science at the University of Minnesota, where she focuses on democracy, citizenship, and constitutionalism. Previously, she was a Research Scholar at the Carnegie Foundation for the Advancement of Teaching. In addition to her work on constitutionalism, she has co-authored books on civic education and political engagement.