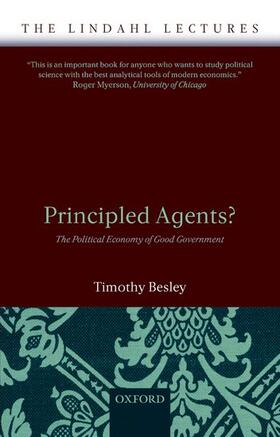 The Political Economy of Good Government

What is good government? Why do some governments fail ? How do you implement political accountability in practice? What incentives do you need to put in place to ensure that politicians and public servants act in the public interest and not their own? These questions and many more are addressed in Timothy Besley's intriguing Lindahl lectures. Economic analyses of government usually divide into two broad camps. One which emphasizes government as a force for public
good that can regulate markets, distribute resources and generally work towards improving the lives of its citizens. The other sees government as driven by private interests, susceptible to those with the power to influence its decisions and failing to incentivize its officials to act for the greater
public good. This book adopts a middle way between the two extremes, the Publius approach, which recognizes the potential for government to act for the public good but also accepts the fact that things often go wrong. It shares the view that there are certain institutional preconditions for effective government but then proceed to examine exactly what those preconditions are. Timothy Besley emphasises that it is not just about designing an appropriate institutional framework but also about
understanding the way incentives work and the process by which the political class is selected.

Besley, Timothy
Timothy Besley is Professor of Economics at the LSE and Director of the Suntory Toyota International Centres for Economics and Related Disciplines (STICERD) at the LSE. He is also a Research Fellow at the Institute for Fiscal Studies and the Centre for Economic Policy Research (CEPR). He has acted as Co-Editor of the American Economic Review and Managing Editor of the Economic Journal. He is an elected member of the Council of the Royal Economic Society, the
Econometric Society, and the European Economics Association.