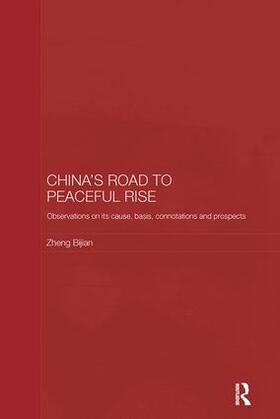 Observations on its Cause, Basis, Connotation and Prospect

Zheng Bijian has been one of the most influential thinkers and policy formulators in China during its reform period. In the early 1990s he worked with Deng Xiaoping collating and publishing Deng’s speeches and as vice president of the Party School gave top priority to ensuring that members of the Party were thoroughly familiar with Deng’s views, theories and reform agenda. In this important book, which is already available in Chinese, Zheng Bijian sets out his views and relates how his views were formed and developed over the long reform period, including the full text of his important speeches and papers, together with appropriate introductory material. Particular key themes which Zheng Bijian’s thought has contributed to China’s development are that China should embrace globalization and strengthen its relationship with the rest of the world, and that China’s development should be peaceful.

"Zheng Bijian’s ideas, actions and vision helped China in its astonishing thirty years growth. Zheng Bijian made a great contribution to envisioning the new role of China in a globalized world. This book is the intellectual story of a great witness of our times." - Romano Prodi, former President of the European Commission and former Prime Minister of Italy

Foreword Peter Nolan Part 1: Acquiring A Deeper Understanding of Ourselves in the Process of Deepening Our Understanding of the World (1988 –1991) Part 2: A Study of the "Overall Strategy" Connecting the Two Major Situations at Home and Abroad is of Paramount Importance (1991 – 1995) Part 3: Deng Xiaoping’s New Generalization of Socialism with Chinese Characteristics Actually Mapped out in A Scientific Way China’s Unique Strategic Road to Peaceful Development (1995 –1998) Part 4: A New Period of Strategic Opportunities and A Brand New Strategic Road for the Rise of Late-Emerging Powers Modern History Has Ever Known (1998 – 2002) Part 5: China Will Emerge In the World as a "Peaceful Nation" and A "Civilized Nation" (2005 – 2006)