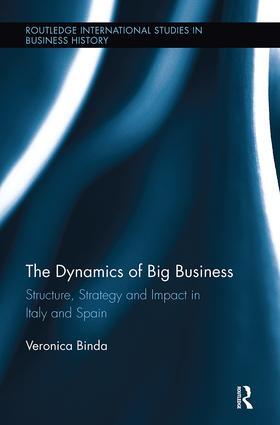 Binda The Dynamics of Big Business

Structure, Strategy, and Impact in Italy and Spain

Binda The Dynamics of Big Business

Throughout the Twentieth Century, big business has been a basic institution. Large corporations have provided a fundamental contribution to the wealth of nations and, at the same time, have had a remarkable impact on the political and social systems within which they have operated. It is difficult to understand the development of the most advanced economies if we do not consider the specific evolution of big business in every national case. On the other hand, it is not possible to explain the shape and behavior of big business without considering its development as part of the history of the country in which they operate. The largest US, German, British and French firms were key actors in favoring their nations' development and, even at the end of the Twentieth Century, made a very important contribution to their growth. In many countries, a stable core of large corporations developed only relatively lately, or did not develop at all, and under these circumstances, big business was not able to significantly participate in the economic growth of such countries. Scholars who dealt with the economic history of Italy and Spain are generally unanimous in tagging these nations as industrial late-comers, ineffective in promoting big autochthonous private and State-owned firms, dominated by family companies, and characterized by a strong competitive advantage on the part of small and medium-sized enterprises. At the same time, Spanish and Italian business and economic historians have tended to say little about the role and features of big business.

This book thus fills a significant gap in the work on the development of Southern European capitalism and its large corporations by analyzing the Italian and Spanish cases and comparing them with each other and with what has occurred in the United States and in the largest European nations. Examining both the macro dynamics (national but also supra national) and the micro level, utilizing samples of big corporations and going deeply into some company cases, this volume identifies some important protagonists of the Italian and Spanish economies (such as the State, families and foreign investors) and investigates a wider panorama which includes the political, economic and social relationships of the corporations, providing insights into the form of capitalism that exists in these countries.

Introduction Part 1: Historical Features of the Italian and Spanish Capitalism 1. The Wars and the Reconstruction Years (1939-1950) 2. The Italian and Spanish Economic Miracles (1950-1973) 3. The Crisis and the Economic Restructuring (1973-1993) 4. Recent Developments (1993-2009) Part 2: Big Business in Italy and Spain 5. Big Business’ Economic Importance 6. Social Role of Large Corporations in Two Modernizing Countries 7. Politics and Big Business in Italy and Spain in a Historical Perspective 8. From Industry to Services 9. Big Business’ Owners and Managers Part 3: Strategy and Structure 10. A ‘One Best Way?’ 11. The Adoption of the Product Diversification Strategy between Single Activity Companies and Business Groups 12. The Internationalization Strategy: The Rise of Italian and Spanish Multinational Companies 13. The Organizational Form: H-Form vs. M-Form Part 4: Interpreting Big Business’ Choices and their Performance 14. Ownership, Technology, and Business Choices 15. Entrepreneurial Choices between Ties and Contingent Opportunities 16. Big Business’ Achievements and Failures 17. The Present Situation and the Future Challenges