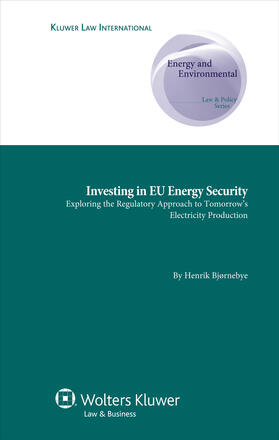 The author of this timely and sharply focused book shows that, in the light of our current knowledge, ensuring new investments – and the right investments – in electricity generation constitutes an urgent energy policy challenge facing the EU over the coming decades. He accordingly makes the case for a serious reconsideration of the market facilitation and market intervention rules under electricity market legislation in the EU. In the first detailed legal analysis of the EU’s internal electricity market framework for investments in electricity generation facilities from the perspective of security of supply, this book cover such legal issues as the following in precise detail: applicability of the Treaty on the Functioning of the European Union (TFEU); security of supply as a ground for exemption on the basis of public security; justifications of public intervention; the applicability of EU State aid provisions to investments in energy security; requirements imposed by EU law on Member States for ensuring cost-efficient investments in European supply security; facilitation of renewable energy sources and cogeneration in the environmental interest; the Court of Justice’s approach to Member State interventions; the Court’s decisions on restrictions on free movement in the environmental interest; Member States’ right to launch tendering procedures for new generation capacity; Member States’ right to impose public service obligations in the general economic interest on certain undertakings; and relationship between the provisions of the TFEU and those of the Euratom Treaty in relation to investments in nuclear power generation. Throughout the study, in addition to his analysis of the decisions of the Court of Justice and the Court of First Instance, the author takes into account legal literature and Union reports, preparatory works, and working papers. The book demonstrates convincingly that today’s energy supply challenges must be based on a broader balancing of security, competitiveness and sustainability interests. It suggests that the internal electricity market provisions of the Electricity Directive and the Security of Electricity Supply Directive would benefit from focusing more intensely on requiring investments in technologies and primary energy sources that will help mitigate climate change and reduce European energy import dependency, and less on the need for ensuring cost-efficient investments through market-based means