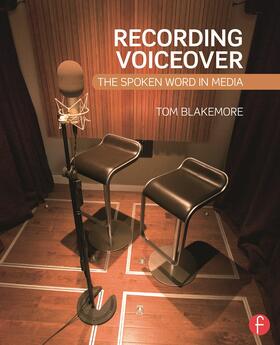 The Spoken Word in Media

The only book on the market to specifically address its audience, Recording Voiceover is the comprehensive guide for engineers looking to understand the aspects of capturing the spoken word.

Discussing all phases of the recording session, Recording Voiceover addresses everything from microphone recommendations for voice recording to pre-production considerations, including setting up the studio, working with and directing the voice talent, and strategies for reducing or eliminating distracting noise elements found in human speech.

Special attention is paid to the final release format and its impact on recording strategies. Exploration of using telephone interfaces – including both analogue and digital ISDN, as well as recording across the internet – is included.

A Life in Sound

A Bit About This Book

The Making of a Superior Voiceover Recording

The Voice in Media

The Beginning of Digital Audio

A Word on Project Studio Acoustics

Fundamentals of the Human Voice

The Engineer at Work

Building a Sense of Trust

Working With the Voice Talent

Some Tips and Tricks

The Matter of Trust

The Dictatorship of the Clock

How Long is Too Long?

Recording for Games and Animation

An Experiment in Voice Recording

The Wacky World of Toys

Building the Sense of Trust

A Passion for Voice

Blakemore, Tom
Tom Blakemore has been an active audio engineer for over thirty years, working in film, television, commercial, and corporate communications as a supervising sound editor and mixer. His film work includes Emmy Award winning documentaries, Academy Award nominees, Directors Guild of America Best Documentary winners, and Audience Award winners at the Toronto, Chicago and Amsterdam Film Festivals. Tom lives in Chicago, where he is an adjunct professor at Tribeca Flashpoint Media Arts Academy teaching film sound, and is a member of the Motion Picture Sound Editors (MPSE) and the Audio Engineering Society (AES).