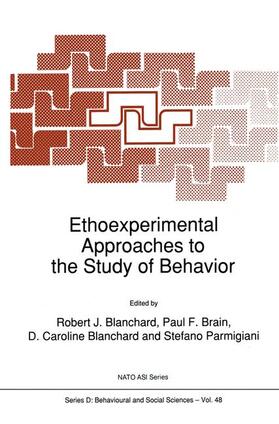 Blanchard / Brain / Blanchard Ethoexperimental Approaches to the Study of Behavior

Blanchard / Brain / Blanchard Ethoexperimental Approaches to the Study of Behavior

This volume is the outcome of a NATO Advanced Study Institute on the Ethoexperimental Analysis of Behavior, which was held at II Ciocco in Tuscany, in July, 1988. This particular ASI had an interesting history. In 1980, a NATO ASI on the topic of the Biology of Aggression was held in Bonas, France. This meeting brought together a group of European and American researchers and students from diverse areas, including Psychology, Zoology, Genetics and the like, all of whom were involved or becoming involved in the study of aggression. The Bonas meeting outlined several emerging trends in aggression research, the most prominent of which was an increased emphasis on the behavioral aspects of aggression. This included studying a variety of aggressive behaviors rather than single measures; an interest in what might have been previously considered minutiae, such as the targets for bites or blows and the specifics of movement relationships in dyadic interactions; and a desire to relate the dependent variables of laboratory tests to the typical aggressive behaviors seen for related animals in their natural habitats. This increased attention to natural patterns of aggressive behavior was also very interesting in light of the many findings presented at the Bonas meeting which indicated particular involvement of a number of biological systems in aggression: These findings suggested that aggression constitutes an evolved neurobehavioral system (quite possibly more than one, in fact) representing the activities of a relatively specific biological substrate expressed through a patterned system of behaviors.

One: Introduction.- Ethology and Experimental Psychology: From Confrontation to Partnership.- Two: Foraging, Feeding and Reactions to Distasteful Prey.- Studies of Learning and Memory in Natural Contexts: Integrating Functional and Mechanistic Approaches to Behavior.- Laboratory Studies of Naturally-Occurring Feeding Behaviors: Pitfalls, Progress and Problems in Ethoexperimental Analysis.- Time Horizons and Foraging Decisions: Reciprocal Contributions from Behavioral Ecology and Experimental Psychology.- Studying Warning Signals in the Laboratory.- Ethoexperimental Analysis of the Response of Young Chicks to Warningly-Colored Prey.- Three: Defensive Behavior.- An Ethoexperimental Approach to the Study of Defense.- Adaptive Interactions of Rats with Dangerous Inanimate Objects: Support for a Cognitive Theory of Defensive Behavior.- The Adaptive Function of Conditioned Defensive Behavior: An Ecological Approach to Pavlovian Stimulus-Substitution Theory.- Acquired Behaviors; Aversive Learning.- Midbrain Localization of Cell Bodies Involved in the Mediation of Intraspecific Defensive Reactions in the Rat.- Population Differences in Minnow Anti-Predator Behavior.- Four: Stress.- Controllability and Predictability of Stress.- Ethoexperimental Analysis of Stress, Contextual Odors, and Defensive Behaviors.- Behavioral Coping in Chronic Stress Conditions.- Is Electroshock of Utility in Ethoexperimental Tests?.- Ethoexperimental Analysis of 'Stress' Analgesia.- Five: Sex and Parenting Behavior.- Choosy Fishes: Mating and Related Issues.- Ethology in the Laboratory: Reproductive Behavior with Special Reference to Maternal Care Among the Mammals.- A Revised View of the Multisensory Control of Maternal Behaviour in Rats: Critical Role of Tactile Inputs.- Influences of Parity (Numbers of Parturitions) on Maternal Behavior and Reproductive Physiology in Rodents.- Mating-Induced Regulation of Infanticide in Male Mice: Fetal Programming of a Unique Stimulus-Response.- Six: Fighting: Offensive and Defensive Behaviors in Conspecific Encounters.- Offensive Behavior as a Prototype for Ethoexperimental Analysis.- Fighting: the Problem of Selecting Appropriate Behavior Patterns.- Offence and Defence and the Assessment of Fighting Ability by Domestic Pigs.- Experimental and Ethological Aspects of Maternal Aggression in Rats: Five Years of Observations.- Social Organization of Experimental Unisex Colonies of Male and Female Rabbits (Oryctolagus Cuniculus).- Social Dominance and Response to a Natural Predator by Rats Selectively Bred for Differences in Shuttle-Box Avoidance Learning.- Ethoexperimental Analysis of Different Forms of Intraspecific Aggression in the House Mouse (Mus Musculus).- Seven: Neurochemical and Pharmacological Influences on Behavior.- Studies on Neurochemistry and Behavior.- The Ethopharmacological Study of Drug Induced Changes in Behaviour.- An Ethopharmacological Study of the Effects of Three Neuroleptics (Haloperidol, Clozapine and Sulpiride) on Aggressive Encounters in Male Mice.- Some Further Ethoexperimental Studies of the Anti-Aggressive Drug Fluprazine Hydrochloride.- Etho-Experimental Studies of Similarities and Differences in Male and Female Agonistics Behaviour.- Models of Mother-Infant Interactions - Their use to Screen for Psychotropic Activity.- Neurochemistry and Behavior: Differential Postweaning Housing and Catecholamines.- Eight: Hormones and Behavior.- An Ethoexperimental Approach to Behavioral Endocrinology.- Interactions of Androgens and Estrogens in the Modulation of Social Behavior in Male Songbirds.- Role of Corticotropin-Releasing Factor in Mediating the Expression of Defensive Behavior.- Nine: Ecology and Behavior.- A Method to Test for Changes During Behavioral Sequences Applied to two Rodent Species (Mus Domesticus and M. Spretus).- The Ecology of Wild Rats: Applications in the Laboratory.- Field Experiments and Observations on Homing and Territoriality in Intertidal Blennies.- Studies on Reptiles i