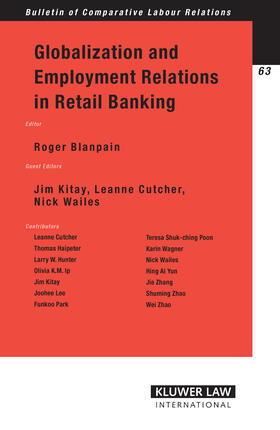 Offering evidence on the nature of the pressure that international
economic change exerts in countries with different forms of labour law and
regulation, this collection of essays explores the impact of globalization on
relations between employees and employers in retail banking. It is the first
comparative analysis of the current nature of these relations in the banking
field at the national and local levels. The articles report preliminary
findings from studies of changes in employment relations in retail banking in
seven economies: Korea, Singapore, Hong Kong, the United States, Australia,
Germany, and China. This grouping covers both liberal market economies (in
which firms rely on markets and hierarchies to resolve coordination problems)
and coordinated market economies (in which firms make greater use of
non-market mechanisms to resolve coordination problems internally and
externally). The article on banking in China is the first English-language
study of the emerging pattern of industry-level employment relations in this
most important of economies. The wealth of data available here allows
practitioners, researchers, academics, and policymakers to reach such valuable
understandings as the following:

-
assess whether there is evidence that the impact of globalization on
employment relations varies systematically across varieties of capitalism;

-
evaluate factors that shape the relationship between international economic
change and patterns of employment relations;

-
gain insight into the relation between foreign direct investment and the
politics, economics, and social systems of particular nation states

-
and focus on distinctive developments in the under-researched Asian region.

Emphasizing five key issues work organization, skill formation, remuneration
systems, staffing arrangements, and enterprise governance, the analysis is
attentive to both issues of change and the role of agents in bringing about
that change. The authors highlight the possibility that within any economy
there may be a range of different and competing sets of institutional logics.
These informative and insightful articles represent the first empirical
findings from the Globalization and Employment Relations in Auto-assemblies
and Banking (GERAB) project. The book demonstrates that the research design of
this project is a giant step toward sophisticated theoretical models that are
capable of capturing and explaining the complex, contingent, and multi-causal
relationship between employers and employees in the context of a changing
world economy.