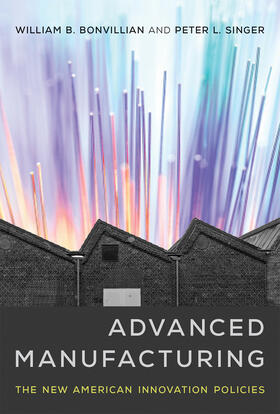 How to rethink innovation and revitalize America's declining manufacturing sector by encouraging advanced manufacturing, bringing innovative technologies into the production process.The United States lost almost one-third of its manufacturing jobs between 2000 and 2010. As higher-paying manufacturing jobs are replaced by lower-paying service jobs, income inequality has been approaching third world levels. In particular, between 1990 and 2013, the median income of men without high school diplomas fell by an astonishing 20% between 1990 and 2013, and that of men with high school diplomas or some college fell by a painful 13%. Innovation has been left largely to software and IT startups, and increasingly U.S. firms operate on a system of “innovate here/produce there,” leaving the manufacturing sector behind. In this book, William Bonvillian and Peter Singer explore how to rethink innovation and revitalize America's declining manufacturing sector. They argue that advanced manufacturing, which employs such innovative technologies as 3-D printing, advanced material, photonics, and robotics in the production process, is the key.Bonvillian and Singer discuss transformative new production paradigms that could drive up efficiency and drive down costs, describe the new processes and business models that must accompany them, and explore alternative funding methods for startups that must manufacture. They examine the varied attitudes of mainstream economics toward manufacturing, the post-Great Recession policy focus on advanced manufacturing, and lessons from the new advanced manufacturing institutes. They consider the problem of “startup scaleup,” possible new models for training workers, and the role of manufacturing in addressing “secular stagnation” in innovation, growth, the middle classes, productivity rates, and related investment. As recent political turmoil shows, the stakes could not be higher.

Bonvillian, William B.
William B. Bonvillian is a Lecturer at MIT, former Director of the MIT Washington Office, and the coauthor of Structuring an Energy Technology Revolution (MIT Press).