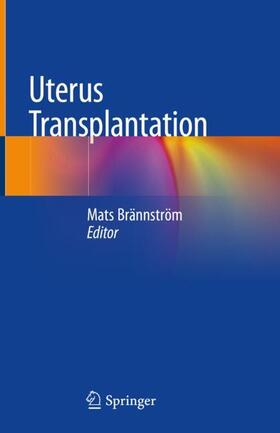 This book discusses all aspects of the uterus transplantation procedure in women who are childless because of a dysfunctional or missing uterus, from initial pre-operative investigations to follow-up after the uterine graft has been removed. All the international experts who are engaged in clinical activities and/or research in this field have contributed one or more of the book’s chapters.
Since the first live birth following uterus transplantation was reported in Sweden in September 2014, the field has been rapidly evolving around the globe: the first cases in USA, Germany, China, Brazil, and Czech Republic were performed in 2016 and several other centres are preparing for clinical trials of uterus transplantation.

Uterus transplantation is a subject that attracts the attention of many bioethicists, and like all other major procedures in transplantation surgery and assisted reproduction techniques, it is a complex process that requires a multidisciplinary team if it is to be successful. As such the book is a valuable resource not only for clinicians from many disciplines, but also for nurses, ethicists, psychologists and researchers.

Brännström, Mats
Mats Brännström is a professor at the University of Gothenburg and chairman of the Department of Obstetrics and Gynecology, Institute of Clinical Sciences, Sahlgrenska Academy, University of Gothenburg, Sweden. His main goal is to improve diagnostics, treatment and postoperative care for a number of common female health issues by performing experimental, clinical and epidemiological studies. He is the first clinician to have performed successful uterus transplantation in women who are childless because of a dysfunctional or missing uterus. Prof. Brannstrom is a member of numerous medical societies, and has won several awards.