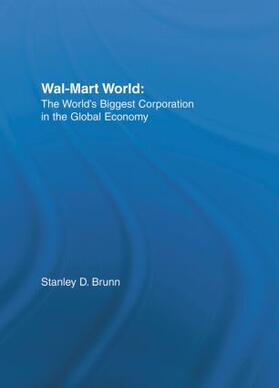 The World's Biggest Corporation in the Global Economy

Now that Wal-Mart has conquered the US, can it conquer the world? As Wal-Mart World shows, the corporation is certainly trying. For a number of years, Wal-Mart has been the largest company in the United States. Now, though, it is the largest company in the world. Its global labor practices and outsourcing strategies represent for many what contemporary economic globalization is all about. But Wal-Mart is not standing still, and is opening up stores everywhere. From Germany to Beijing to Mexico City to Tokyo, more than a billion shoppers can now hunt for bargains at a Wal-Mart superstore. Wal-Mart World is the first book to look at this incredibly important phenomenon in global perspective, with chapters that range from its growth in the US and impact on labor relations here to its fortunes overseas. How Wal-Mart manages this transition in the near future will play a significant role in the determining the character of the global economy. Wal-Mart World's impressively broad scope makes it necessary reading for anyone interested in the global impact of this economic colossus.

Part I: Corporation History and the American Experience1. Northwest Arkansas: The Home of Wal-Mart Stores, Inc. 2. "Reading" Wal-Mart's Success Through the American Experience: Mixes of Frontierism, Consumerism, Grassroots Entrepreneurialism, Rural Renaissance and Globalization Part II: The Corporation 3. Global Production Networks and Local Distributors: Wal-Mart and the Logistics of Production 4. The Wal-Mart Nexus: Corporate Elites and Networks 5. Wall Street and Wal-Mart: Overcoming Headquarters Isolation To Finance the Creation of the World's Largest Retailer 6. The Wal-Martization of the U.S. Food Industry 7. Wal-Mart Supercenter Market Share in Grocery Retailing the U.S. Metropolitan Areas 8. Women Workers at Wal-Mart Part III: Globalization 9. Wal-Mart's World 10. The Geopolitics of Global Business: Wal-Mart and the Wider World 11.Retailers of the World Unite: What Happens When Retailers Rule the World 12. Wal-Mart, Inc., gov.: Far Eastern Tales of Consumer-Led Democracy 13. Penetrating the Emerging Markets: The Entry and Expansion of Wal-Mart in China 14. Consuming Wal-Mart: A Case Study in Shenzhen 15. Challenges Facing Wal-Mart in the German Market 16. The Myth of Wal-Martization: Retail Globalization and Local Competition in Germany and Japan 17. Wal-Mart in Mexico: A Retail Sector in Transition 18. Is Wal-Mart the New Standard Bearer of Industrial Relations in America 19. Wal-Mart as a Legal Strategy 20. Is Design Review an Effective Tool in Shaping Wal-Mart To Fit the Inner City Setting? 21. The Resistance of Rural African-American Communities to Wal-Mart Developments Part V: Consumerism and Popular Culture 22. The Institutional Semiotics of Wal-Mart's Retail Internationalization 23. Cathedrals of Consumption: Commodity Signs and the Walmartization of Consumer Consciousness 24. Marketing, Advertising, and Local Community Relationships in Wal-Mart's Expansion 25. Wal-Mart as a Country Store: A Case Study in Folk Culture and Globalization 26. Wal-Mart and the Rural Landscape 27. Finding the Heart of America in the Aisles of Wal-Mart: Where the Heart Is as a Popular Culture Discourse 28. Photoessay on Wal-Mart

Brunn, Stanley D. (Stanley D. Brunn, Professor of Geography, University of Kentucky, USA)
Stanley D. Brunn is Professor of Geography at the University of Kentucky.He is the former editor of both The Professional Geographer and of the Annals, AAG.His research record includes a number of authored and edited books and numerous articles that have appeared in geography and interdisciplinary journals. He has taught for short periods at more than a dozen European and Central Asian universities; these include Finland, Sweden, Ireland, Switzerland, Austria, Slovenia, the Netherlands, Bosnia, Kosovo, Kazakstan, and Kyrgyzstan. During the past four decades he has made presentations at dozens of national and international conferences. He was elected University of Kentucky Distinguished Professor in the College of Arts and Sciences in 1989-90. Stan has also been active in the Association of American Geographers, including editor of both The Professional Geographer and of the Annals, AAG. He received AAG Honors in 1994; also he has served on a number of IGU, NCGE, and AAG committees, including co-chair of the AAG Centennial Coordinating Committee. During the past two decades he has worked with educators in Kentucky to train teachers and to improve the quality of instruction in the state's schools. Among the many highlights of his professional career was his appearance on NBC's Today Show in 1971 to discuss his proposed political reorganization of the United States.