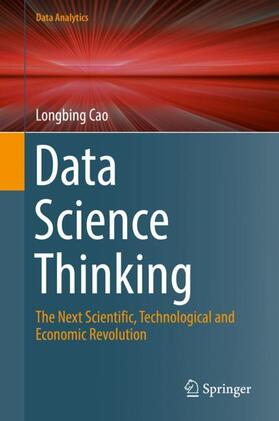 The Next Scientific, Technological and Economic Revolution

This book explores answers to the fundamental questions driving the research, innovation and practices of the latest revolution in scientific, technological and economic development: how does data science transform existing science, technology, industry, economy, profession and education? How does one remain competitive in the data science field? What is responsible for shaping the mindset and skillset of data scientists?

Cao, Longbing
Longbing Cao holds a PhD in Pattern Recognition and Intelligent Systems from the Chinese Academy of Sciences, China and another PhD in Computing Science at the University of Technology Sydney, Australia. He is a professor of data science at UTS. He has been working on data science and analytics research, education, development, and enterprise applications since he was a CTO and then joined academia. Motivated by real-world significant and common challenges, he has been leading the team to develop theories, tools and applications for new areas including non-IID learning, actionable knowledge discovery, behavior informatics, and complex intelligent systems, in addition to issues related to artificial intelligence, knowledge discovery, machine learning, and their enterprise applications. In data science and analytics, he initiated the Data Science and Knowledge Discovery lab at UTS in 2007, the Advanced Analytics Institute in 2011, the degrees Master of Analytics (Research) and PhD in Analytics in 2011 which are recognized as the world's first degrees in data science, the IEEE Task Force on Data Science and Advanced Analytics (DSAA) and IEEE Task Force on Behavior, Economic and Soci-cultural Computing in 2013, the IEEE Conference on Data Science and Advanced Analytics (DSAA), the ACM SIGKDD Australia and New Zealand Chapter in 2014, and the International Journal of Data Science and Analytics with Springer in 2015. He served as program and general chairs of conferences such as KDD2015. In enterprise data science innovation, his team has successfully delivered many large projects for government and business organizations in over 10 domains including finance/capital markets, banking, health and car insurance, health, telco, recommendation, online business, education, and the public sector including ATO, DFS, DHS, DIBP and IP Australia, resulting in billions of dollar savings and mentions in government, industry, media and OECD reports.