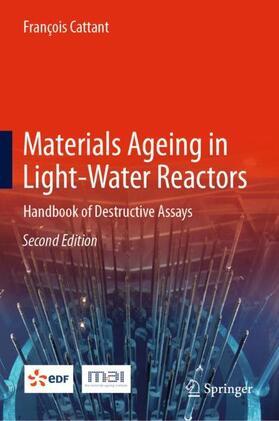 This book is an extensive and detailed guide to the subject of materials ageing in light-water nuclear reactors. Proper management of materials degradation is essential for the safe, reliable, and economic operation of nuclear power plants across the globe. This handbook features a stunning and thorough observational treatment of the key materials degradational phenomena in light-water reactors, capturing the results of some typical destructive examinations that have been carried out to understand and furthermore mitigate these failures. It provides a comprehensive collection of unique photographs, detailed schematics, concise analyses, as well as precise measurements and expert recommendations. It is organized in such a manner that engineers and scientists can use the observations presented to not only arrive at their own conclusions but also subsequently improve their knowledge of specific materials ageing issues.
This handbook is supported by the Materials Ageing Institute (MAI) and Électricité de France (EDF) and is an extensive update to the previous edition, featuring up-to-minute information to reflect the state of the art as of 2020. Since its founding in 2008, the MAI has succeeded in expanding its membership and today represents two-thirds of the world's installed nuclear power capacity, benefiting from nearly 5,000 years of combined experience in reactor operation. The vast archive of past observational data and world-leading expert recommendations presented in this handbook leverage the unique expertise of the MAI in studying the key degradation phenomena of materials to ensure the secure and sustainable operation of carbon-free electricity production. It is a must-have on the desks of any engineers or researchers involved in ageing management for light-water reactors.

Cattant, François
François Cattant graduated in chemical engineering in 1974 and joined Electricity of France (EDF) in 1975 as a chemical engineer in the Plant Operation Division working on the water and steam conditioning of power plants. Two years later, he moved to the hot laboratory at the Chinon Nuclear Power Plant to examine failures and do root cause analysis of gas-cooled reactor components, including fuel. In 1980, he became the manager of a regional section for water and steam chemistry, chemical cleaning and non-destructive examination in fossil stations. He returned to the Chinon hot laboratory 3 years later where he continued to focus on failure root cause analysis of irradiated or contaminated components, monitoring of reactor pressure vessel (RPV) irradiation programs, examination of steam generator tubes, RPV head penetrations, split pins, pressurizer nozzles, valves, reactor cooling system cast elbows, piping, fuel bundle and rods, rod cluster control assemblies, and much more.During 1995-1998, he was assigned as an expatriate engineer to the Nuclear Maintenance Applications Center of the Electric Power Research Institute in the USA where he worked on nuclear plant maintenance issues. While at EPRI, he also participated as an outside expert on the examination of Ringhals 3 retired steam generator.Returning back in France in 1998, François joined EDF R&D Materials and Mechanics of Components Department as a scientific advisor and senior engineer. His work involved chemistry, corrosion, and metallurgy with special attention to primary water chemistry, source term reduction, primary water corrosion, corrosion mitigation and repair, fuel cleaning and innovation strategies. He continued to serve as the EDF representative to the EPRI’s Materials Reliability Program. In this capacity, he participated in several destructive examinations such as North Anna Unit 2 RPV head penetrations, South Texas Project Unit 1 Bottom Mounted Instrumentation, Braidwood Unit 1 pressurizer heater #52 and San Onofre Unit 3 CEDM #64.From 2004 to 2008, he was the president of the "Materials, Non-Destructive Testing and Chemistry" section of the "French Nuclear Energy Society”, and from 2008 to 2009, he was in charge of the International Partnerships of the Materials Ageing Institute (MAI).Subsequent to his retirement from EDF in 2009, he was commissioned by the MAI to collect details and produce summaries of destructive examinations performed on failures in light-water reactor components in France, USA, Japan, and Sweden which have now been compiled in this unique handbook.In 2014, the French Nuclear Energy Society awarded its “Grand Prix” to this “Handbook of Destructive Assays”.Ten years later, the MAI asked him to update this handbook, with both domestic and international recent field experience.