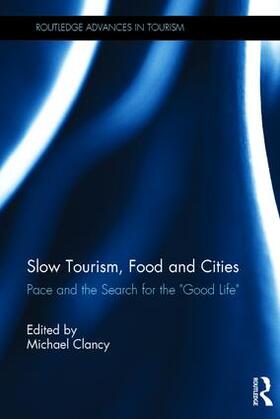 Pace and the Search for the "Good Life"

Slow Food began in the late 1980s as a response to the spread of fast food establishments and as a larger statement against globalization and the perceived deterioration of modern life. Since then, slow practices have permeated into other areas, including cities and territories and travel and tourism.

This book provides an in-depth examination of slow food, tourism and cities, demonstrating how these elements are intertwined with one other as part of the modern search for "the good life." Part 1 locates the slow concept within the larger social setting of modernity and investigates claims made by the slow movement, examining aesthetic and instrumental values inherent to it. Part 2 explores the practices and places of slow, containing both conceptual and empirical chapters in Italy, the birthplace of the movement. Part 3 provides a comparative perspective by examining the practices in Spain, the UK, Germany and Canada.

Slow Tourism, Food and Cities offers key theoretical insights and alternative perspectives on the varying practices and meanings of slow from a cultural, sociological and ethical perspective. It is a valuable text for students and scholars of sociology, geography, urban studies, social movements, travel and tourism, and food studies.

1. Introduction: The rise of slow in a fast world
Michael Clancy

Part 1: Locating Slow: The philosophical and sociological roots of the Slow movement

2. ‘Travel too fast and you miss all you travel for’: Slower mobilities and the politics of paceJennie Germann Molz

Part 2: Places and Practices of Slow

9. Between slow tourists and operators: expectations and implications of a strategic cross-border proposal
Moreno Zago

13. Embedding Slow Tourism and the ‘Slow Phases’ framework: The case of Cambridge, UK
Michael B. Duignan and Chris Wilbert

15. Conclusion: The promises and pitfalls of slow
Michael Clancy

Clancy, Michael
Michael Clancy is Professor of political science in the Department of Politics, Economics, and International Studies at the University of Hartford, USA. He is the author of two books on tourism and development in Mexico and Ireland, respectively, and has written on various aspects of tourism and political economy.