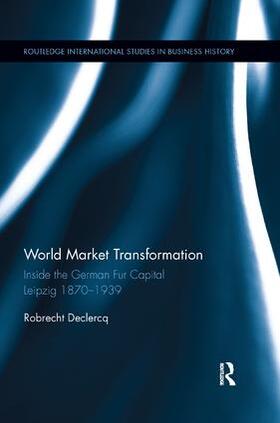 To the surprise of many, regionally embedded clusters of small to medium sized businesses have continued to exist in spite of industrialisation and mass production. While scholars have discovered that the advantages of embeddedness in terms of industrialisation were situated in interfirm cooperation and conflict resolving mechanisms, it is far less clear how changing historical circumstances on the world market, i.e. globalisation, affected such systems.
Taking a look inside Leipzig, a capital of the global fur industry between 1870 and 1939 with its numerous highly specialised businesses, both in production as well as trade, World Market Transformation examines the robustness of district firms within the highly volatile international fur business. This book examines how firm embeddedness not only served to overcome challenges related to industrialisation, but also strengthened the abilities of cluster firms to deal with changing world market circumstances.
World Market Transformation integrates the "interior-biased" research tradition on local business systems and industrial districts into the "exterior" fields of global and transnational history. It is demonstrated that the local business district not only emerged because of the expansion of international trade, but that district processes of interfirm cooperation also gave shape to the spatial distribution, conventions and structures of the very same world market. The analysis of embedded communities thus offers an important instrument to examine phenomena of economic globalisation, but also how such macro-economic developments have been shaped and actively constructed by local actors.

1.The Leipzig Fur Capital as a Local Business System
2. The Making of the Fur Capital Leipzig (1850-1914)
3. Linking the Capital to the Outside World

Declercq, Robrecht (European University Institute, It)
Robrecht Declercq is Postdoctoral Researcher connected to the research group Communities, Connections, and Comparisons (CCC) and the History Department of the Ghent University, Belgium.