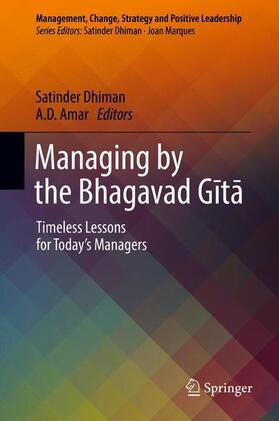 Drawing upon the timeless wisdom of the Bhagavad Gita, a philosophical-spiritual world classic, this professional book highlights the spiritual and moral dimensions of management using an inside-out leadership development approach. It interprets the Bhagavad Gita’s teachings on understanding the personality types and psychological makeup of managers and employees, self-knowledge and self-mastery, and the leadership concepts of vision, motivation, and empowerment. This book covers topics such as training of the mind, ethical leadership, communication, stress management, and corporate social responsibility (CSR). Collectively, the enclosed contributions provide managers with an enhanced outlook on management functions such as leading, planning, organizing, and controlling in today’s organizations, particularly organizations that are run by knowledge workers. This book is therefore applicable to all managers, from first-line to CEOs, in their management and leadership roles in organizations.

Management research in the 20th century has mainly focused on the industrial paradigm characterized by a hierarchical structure of authority and responsibility with an individualistic focus on the personality of the manager—one person directing other people for materialistic, utilitarian ends. However, this traditional paradigm cannot solve many of the problems that confront leaders and mangers today. Recent studies have shown that values traditionally associated with spirituality—such as integrity, honesty, trust, kindness, caring, fairness, and humility—have a demonstrable effect on managerial effectiveness and success. This brings back need for the time-tested management style and wisdom from the wisdom of the past. Although traditionally interpreted as a religious-spiritual text, the Bhagavad Gita encompasses great practical management lessons that can be very relevant to decision making in today’s corporate boardrooms. Its message fosters the holistic development of human personality in all its dimensions—physical, psychological, emotional, intellectual, and spiritual.
Applying the text of the Bhagavad Gita to the context of management, this book addresses the greatest management dilemma: What is the right thing to do in a given situation? It views the manager as an “enlightened sage” who operates from higher stance of being anchored in authentic self, guided by self-knowledge and self-mastery. It shows why managers need to be aware of the self and the surroundings, why mind matters most in self-management, why managers need right knowledge and right intention, and how character is the key ingredient of effective management and leadership.

Dhiman, Satinder
Satinder Dhiman: Recognized as a lead thinker for his pioneer contributions to the field of spirituality in the workplace, sustainability, and fulfillment in personal and professional arena, Professor Dhiman is a sought after Keynote speaker at regional, national and international conferences. In 2013, Dr. Dhiman was invited to be the opening speaker at the prestigious TEDx Conference @ College of the Canyons in Santa Clarita, California. With an instructional and research focus on leadership and organizational behavior-and with specific concentration on sustainability, workplace spirituality and wellbeing-Professor Dhiman holds a PhD in Social Sciences from Tilburg University, Netherlands, an EdD in Organizational Leadership from Pepperdine University, Los Angeles, an MBA from West Coast University, Los Angeles, and a Master's degree in Commerce from Panjab University, Chandigarh, India, having earned the Gold Medal. He has also completed advanced Executive Leadership Programs at Harvard, Stanford, and Wharton.
Recipient of several national and international academic and professional honors, Dr. Dhiman won the Woodbury University Ambassador of the Year Award in 2015 and 2017 and MBA Professor of the Year Award in 2015; Most Inspirational and Most Charismatic MBA Professor of the Year Award in 2012, 2013, and 2014; the Steve Allen Excellence in Education Award in 2006, and the prestigious ACBSP International Teacher of the Year Award in 2004.

Currently, Professor Dhiman serves as the Associate Dean, Chair and Director of the MBA Program; and the Professor of Management at Woodbury University, Burbank, California. He has served as the Chair for a special MBA Program for the Mercedes-Benz executives, China. Dr. Dhiman also serves as Accreditation Consultant, Evaluator, and Site Visit Team Leader for the Accreditation Council for Business Schools and Programs (ACBSP) for various universities in America, Canada, Europe, and Asia.Professor Dhiman is the Founder-Director of Forever Fulfilled, a Los Angeles-based Wellbeing Consultancy that focuses on workplace wellness, workplace spirituality, and self-leadership. He also serves as the President of International Chamber for Service Industry (ICSI).
A. D. Amar (Amar Dev Amar): An ex