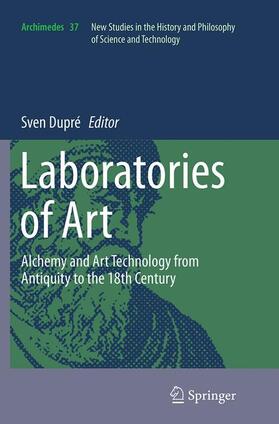 Alchemy and Art Technology from Antiquity to the 18th Century

This book explores the interconnections and differentiations between artisanal workshops and alchemical laboratories and between the arts and alchemy from Antiquity to the eighteenth century. In particular, it scrutinizes epistemic exchanges between producers of the arts and alchemists. In the fifteenth and sixteenth centuries the term laboratorium uniquely referred to workplaces in which ‘chemical’ operations were performed: smelting, combustion, distillation, dissolution and precipitation. Artisanal workshops equipped with furnaces and fire in which ‘chemical’ operations were performed were also known as laboratories. Transmutational alchemy (the transmutation of all base metals into more noble ones, especially gold) was only one aspect of alchemy in the early modern period. The practice of alchemy was also about the chemical production of things--medicines, porcelain, dyes and other products as well as precious metals and about the knowledge of how to produce them. This book uses examples such as the Uffizi to discuss how Renaissance courts established spaces where artisanal workshops and laboratories were brought together, thus facilitating the circulation of materials, people and knowledge between the worlds of craft (today’s decorative arts) and alchemy. Artisans became involved in alchemical pursuits beyond a shared material culture and some crafts relied on chemical expertise offered by scholars trained as alchemists. Above all, texts and books, products and symbols of scholarly culture played an increasingly important role in artisanal workshops. In these workplaces a sort of hybrid figure was at work. With one foot in artisanal and the other in scholarly culture this hybrid practitioner is impossible to categorize in the mutually exclusive categories of scholar and craftsman. By the seventeenth century the expertise of some glassmakers, silver and goldsmiths and producers of porcelain was just as based in the worlds of alchemical and bookish learning as it was grounded in hands-on work in the laboratory. This book suggests that this shift in workshop culture facilitated the epistemic exchanges between alchemists and producers of the decorative arts.

About the Authors.- Introduction; Sven Dupré.- Chapter 1 The Alchemical Art of Dyeing: The Fourfold Division of Alchemy and the Enochian Tradition; Matteo Martelli.- Chapter 2 Transmission of Alchemical and Artistic Practices and Materials in German Mediaeval and Premodern Recipe Books; Sylvie Neven.- Chapter 3 Artisanal Processes and Epistemological Debate in the Works of Leonardo da Vinci and Vannoccio Biringuccio; Andrea Bernardoni.- Chapter 4 Artificial Interventions in the Natural Form of Things: Shared Mettallogenetical Concepts of Goldsmiths and Alchemists; Henrike Haug.- Chapter 5 The Laboratories of Art and Alchemy at the Uffizi Gallery in Renaissance Florence: Some Material Aspects; Fanny Kieffer.- Chapter 6 Material and Temporal Powers at the Casino San Marco (1574-1621); Marco Berretta.- Chapter 7 Goldsmiths and Chymists: The Activity of Artisans within Alchemical Circles; Lawrence M. Principe.- Chapter 8 Refutata per ignem: The Evidence for the Use of Thermal Analysis in Seventeenth Century European Ceramic Innovation; Morgan Wesley.