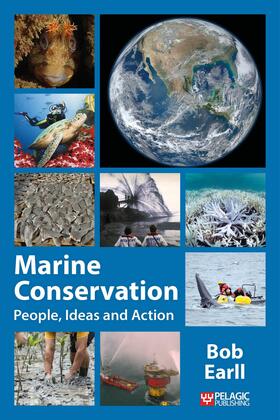 Bob Earll explores what marine conservation involves in practice by providing a synthesis of the main developments from the viewpoints of 19 leading practitioners and pioneers who have helped shape its progress and successes.

Their narratives highlight the diversity and richness of activity, and the realities of delivering marine conservation in practice with reference to a host of projects and case studies. Many of these narratives demonstrate how innovative conservationists have been – often developing novel approaches to problems where little information and no frameworks exist. The case studies described are based on a wide range of European and international projects.

This book takes an in-depth look at the reality of delivering marine conservation in practice, where achieving change is often a complicated process, with barriers to overcome that have nothing to do with science. Marine conservationists will often be working with stakeholders for whom marine conservation is not a priority. This book aims to help readers describe and understand those realities, and shows that successful and inspirational projects can be delivered against the odds.

Earll, Bob
Inspired by a range of diving projects from the late 1960s, Bob Earll studied zoology and then the ecophysiology of mussels for his PhD. Work on citizen science projects for divers lead to his appointment for what became the Marine Conservation Society (MCS). From 1978-1992 he led and helped develop the organisation’s growth through its early days, co-ordinating a wide range of marine conservation issues from basking sharks, pollution, MPAs and ICZM. Since leaving MCS he helped set up a variety of organisations and networks on issues from shark conservation, aquatic litter and a marine industry group.

He is a consultant for Government, its agencies and NGOs on a wide range of topics. Through his skills as a conference and meetings convenor he has worked on a wide variety of issues from fish farming, aggregates, marine spatial planning and marine legislation. He has organised well over 200 conferences but the Coastal Futures conference, now approaching its 25th year, which takes place annually in London, is recognised as the main meeting that brings together the UK’s coastal and marine environmental community. He runs CMS - Communications and Management for Sustainability - which provides a unique jobs and events advertising services and weekly newsletters to the marine community of over 6,000 people.