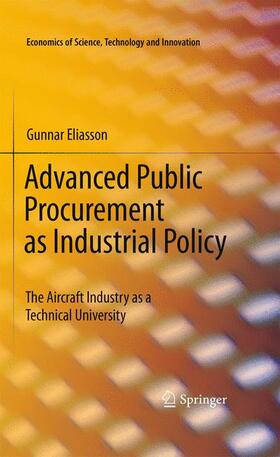 The Aircraft Industry as a Technical University

The primary theme of this book is to investigate the macroeconomic significance of the "cloud" of technological spillovers that surrounds advanced industrial production: In what ways do technological innovations spread and contribute to economic growth? What policies can be developed to maximize the economic potential of innovations?

These themes are particularly timely in the context of global economic crisis, government-sponsored stimulus packages, and the ongoing evolution from manufacturing-based to knowledge-based economies.

To explore these issues in depth, Gunnar Eliasson focuses on a detailed case study of the development of Saab’s military aircraft, the JAS 39 Gripen system—a project that involves advanced technological innovations, a complex network of suppliers, public-private sector collaboration, and both military and commercial applications. The experience in the aircraft industry is also compared with spillover effects in telephony, computers, and medical technologies.

The study emphasizes the role of customer competence in raising the quality of innovation supply, and of entrepreneurship and industrially competent venture capital for commercializing spillovers. Eliasson integrates micro-econometrics and case study analysis with macroeconomics, innovation study methods, and business administration theory to measure the effects of technology spillovers and generate a solid empirical foundation for policy analysis.

In particular, he considers:

the emergence of the advanced firms as "technical university," where continual learning takes place and entrepreneurship among customers and other stakeholders is encouraged

the implications for strategic business practice and public policy

The result is a book that will appeal to a broad spectrum of academics, industry leaders, and policymakers interested in the dynamics of innovation supply, commercialization of technologies and economic growth.

On the Cloud of Technology that Surrounds Advanced Production: A Summary of Results.- The Art of Defining, Pricing, and Marketing Advanced Multidimensional Products that Spill Technology.- Spillovers and Innovative Technology Supply: A Literature Survey.- Capturing the Direct and the Serendipitous Spillovers: The Case of Sweden's Military Aircraft Industry.- Looking into the Future on JAS Gripen Spillovers.- Saab in South Africa: Technology Transfer to an Industrializing Economy.- The European Policy Perspective.- Private and Social Spillover Benefits from Advanced Procurement: Defining and Estimating the Spillover Multiplier.- Advanced Purchasing as Industrial Policy: On the Advanced Firm as a Technical University.

Eliasson, Gunnar
Gunnar Eliasson is professor em of Industrial Economics/Dynamics at the Royal Institute of Technology (KTH) in Stockholm . He is an associate senior researcher at the Ratio Institute in Stockholm. He was previously president of the Industrial Institute for Economic and Social Research (IUI) in Stockholm and before that Chief Economist and Director of the Economic Policy Department at the Federation of Swedish Industries. From 1994 to 1996 he was the President of the International Joseph A. Schumpeter Society. He is the father of the Swedish micro to macro simulation model MOSES and the theory of the Experimentally Organized Economy and of Competence Blocs. He has published many books and many journal articles in the fields of industrial economics, the theory of the firm, business economic planning and management, labor and education economics and simulation modeling. Among the books can be mentioned Business Economic Planning (1976), Technological Competition and Trade in the Experimentally Organized Economy (1987), The Knowledge Based Information Economy (1990) , Firm Objectives, Controls and Organization (1996) and The Birth, the Life and the Death of Firms (2005). Together with his wife Ulla he has authored a study on the 15th century art markets in Northern Italy and Florence (1997). Gunnar Eliasson´s current research is focused on the economics of the firm and management, technology, entrepreneurship and economic development and on the competence demands on the labor markets of the New Economy.