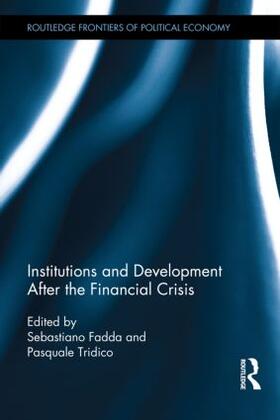 Fadda / Tridico Institutions and Development After the Financial Crisis

Fadda / Tridico Institutions and Development After the Financial Crisis

The financial crash of 2007-2008 and the subsequent global economic crisis have raised questions about the viability of capitalism and the desirability of alternative types of economic system. In this context, Keynesian and Marxist ideas in particular have become more popular. These two approaches, along with some other heterodox perspectives, agree on the need for institutional analysis and for better institutions and governance in order to promote economic development.
This volume poses fundamental institutional, evolutionary and ontological questions relating to the emergence of a new mode of governance after the financial crisis. The book argues that, contrary to the recent austerity policies implemented in the EU in particular, a new level of government involvement is required in order to keep aggregate demand stable, make full employment possible, and create a transparent financial sector, serving the real economy and encouraging productive investments.
This book will be of interest to students, researchers and policy makers working in the areas of finance, institutional economics, development economics and international political economy.