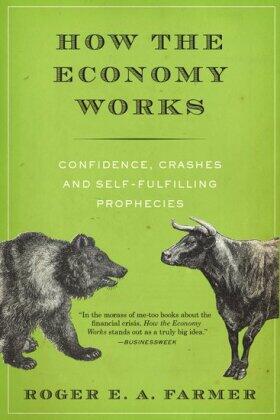 Farmer How the Economy Works

Farmer How the Economy Works

"Of all the economic bubbles that have been pricked," the editors of The Economist recently observed, "few have burst more spectacularly than the reputation of economics itself." Indeed, the financial crisis that crested in 2008 destroyed the credibility of the economic thinking that had guided policymakers for a generation. But what will take its place?

In How the Economy Works, one of our leading economists provides a jargon-free exploration of the current crisis, offering a powerful argument for how economics must change to get us out of it. Roger E. A. Farmer traces the swings between classical and Keynesian economics since the early twentieth century, gracefully explaining the elements of both theories. During the Great Depression, Keynes challenged the longstanding idea that an economy was a self-correcting mechanism; but his school gave
way to a resurgence of classical economics in the 1970s—-a rise that ended with the current crisis. Rather than simply allowing the pendulum to swing back, Farmer writes, we must synthesize the two. From classical economics, he takes the idea that a sound theory must explain how individuals
behave—-how our collective choices shape the economy. From Keynesian economics, he adopts the principle that markets do not always work well, that capitalism needs some guidance. The goal, he writes, is to correct the excesses of a free-market economy without stifling entrepreneurship and instituting central planning.

Recent events have shown that we cannot afford to treat economics as an ivory-tower abstraction. It has a direct impact on our lives by guiding regulators and policymakers as they make decisions with far-reaching practical consequences. Written in clear, accessible language, How the Economy Works makes an argument that no one should ignore.

Preface; 1. Introduction; 2. Classical Economics; 3. Keynes and the World Economy; 4. Where the Keynesians Lost Their Way; 5. The Rational Expectations Revolution; 6. How Central Banks Impact Your Life; 7. Why Unemployment Persists; 8. Why the Stock Market Matters to You; 9. Will There be Another Great Depression?; 10. Will Monetary and Fiscal Policy Work?; 11. How to Solve a Financial Crisis; Glossary; Notes

Farmer, Roger E. A.
Roger E. A. Farmer is Professor and Chair of the Economics Department at UCLA. The author of six books and numerous journal articles, he is a Research Associate of the National Bureau of Economic Research and of the Centre for Economic Policy Research. He has served as a consultant to the Federal Reserve Bank of Atlanta, the Reserve Bank of Australia, the European Central Bank and the Bank of England. He is a contributor to the Financial Times Economists' Forum and,
in 2000, received the University of Helsinki medal in recognition of his work.