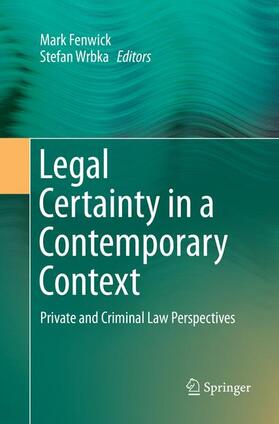 This
book addresses issues concerning the shifting contemporary meaning of legal
certainty. The book focuses on exploring the emerging tensions that exist
between the demand for legal certainty and the challenges of regulating
complex, late modern societies. The book is divided into two parts: the first
part focusing on debates around legal certainty at the national level, with a
primary emphasis on criminal law; and the second part focusing on debates at
the transnational level, with a primary emphasis on the regulation of
transnational commercial transactions.

In
the context of legal modernity, the principle of legal certainty—the idea that
the law must be sufficiently clear to provide those subject to legal norms with
the means to regulate their own conduct and to protect against the arbitrary
use of public power—has operated as a foundational rule of law value. Even
though it has not always been fully realized, legal certainty has functioned as
a core value and aspiration that has structured normative debates throughout
political modernity, both at a national and international level.

In
recent decades, however, legal certainty has come under increasing pressure
from a number of competing demands that are made of contemporary law, in
particular the demand that the law be more flexible and responsive to a social
environment characterized by rapid social and technological change. The
expectation that the law operates in new transnational contexts and regulates
every widening sphere of social life has created a new degree of uncertainty,
and this change raises difficult questions regarding both the possibility and
desirability of legal certainty.

This book compiles, in one edited volume, research from a range of
substantive areas of civil and criminal law that shares a common interest in
understanding the multi-layered challenges of defining legal certainty in a
late modern society. The book will be of interest both to lawyers interested in
understanding the transformation of core rule of law values in the context of
contemporary social change and to political scientists and social theorists.