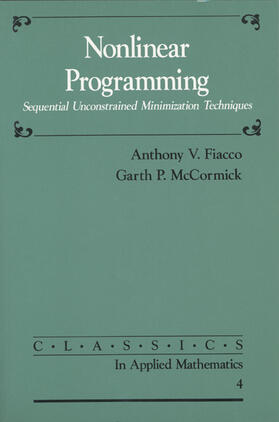 A reprint of the original volume, which won the Lanchester Prize awarded by the Operations Research Society of America for the best work of 1968. Although out of print for nearly 15 years, it remains one of the most referenced volumes in the field of mathematical programming. Recent interest in interior point methods generated by Karmarkar's Projective Scaling Algorithm has created a new demand for this book because the methods that have followed from Karmarkar's bear a close resemblance to those described. There is no other source for the theoretical background of the logarithmic barrier function and other classical penalty functions. Analyzes in detail the 'central' or 'dual' trajectory used by modern path following and primal/dual methods for convex and general linear programming. As researchers begin to extend these methods to convex and general nonlinear programming problems, this book will become indispensable to them.