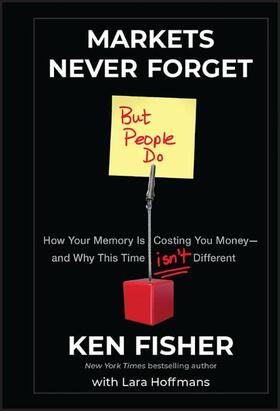 Sir John Templeton, legendary investor, was famous for saying, "The four most dangerous words in investing are, 'This time it's different.'" He knew that though history doesn't repeat, not exactly, history is an excellent guide for investors.

In Markets Never Forget But People Do: How Your Memory Is Costing You Money and Why This Time Isn't Different, long-time Forbes columnist, CEO of Fisher Investments, and 4-time New York Times bestselling author Ken Fisher shows how and why investors' memories fail them--and how costly that can be. More important, he shows steps investors can take to begin reducing errors they repeatedly make. The past is never indicative of the future, but history can be one powerful guide in shaping forward looking expectations. Readers can learn how to see the world more clearly--and learn to make fewer errors--by understanding just a bit of investing past.

Bull Markets Are Inherently Above Average 32

Normal Returns Are Extreme, Not Average 47

The Pause That Refreshes (and Confuses) 49

Getting Average Returns Is Hard--Really Hard 53

What the Heck Is Volatility? 58

Stocks Are Less Volatile Than Bonds? 67

Stocks--Up Vastly More Than Down 90

Deficits Aren't Bad, but Surpluses Will Kill You 105

The History of Big Government Debt 110

No One Category Is Best for All Time 124

It's Still Heat Chasing Even When It Seems Safe 134

Use History to Your Advantage 146

Perverse Inverse--It's Four and One 160

It's Always Been a Small World 179

Fisher, Kenneth L.
Ken Fisher is best known for his prestigious "Portfolio Strategy" column in Forbes magazine, where his over 27-year tenure of high-profile calls makes him the fourth longest-running columnist in Forbes's 90-plus year history. He is the founder, Chairman and CEO of Fisher Investments, an independent global money management firm managing tens of billions for individuals and institutions globally. Fisher is ranked #252 on the 2010 Forbes 400 list of richest Americans, and #736 on the 2011 Forbes global billionaires list. In 2010, Investment Advisor magazine named him among the 30 most influential individuals of the last three decades. Fisher has authored numerous professional and scholarly articles, including the award-winning "Cognitive Biases in Market Forecasting." He has also published seven previous books, including New York Times and Wall Street Journal bestsellers, The Only Three Questions That Count, The Ten Roads to Riches, How to Smell a Rat and Debunkery, all published by Wiley. Fisher has been published, interviewed and/or written about in many major American, British and German finance or business periodicals. He has a weekly column in Focus Money, Germany's leading weekly finance and business magazine.

Lara Hoffmans is a content manager at Fisher Investments, managing editor of MarketMinder.com, a regular contributor to Forbes.com and co-author of the bestsellers, The Only Three Questions That Count, The Ten Roads to Riches, How to Smell a Rat and Debunkery.