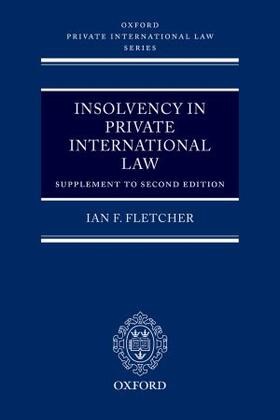 This supplement to the second edition of Insolvency in Private International Law covers the key developments in case law and legislation in the subject up to October 2006, and is an essential purchase for all who have already bought the main work.

It includes the full text of the Cross-Border Insolvency Regulations 2006, along with commentary on the regulations. The supplement also includes the text of Council Regulation 694/2006, amending EC Regulation 1346/2000 on insolvency proceedings, and references to key developments in case law, including Eurofood IFSC Ltd, Daisytek ISA, and Cambridge Gas Transport Corp v Official Committe of Unsecured Creditors of Navigator Holdings plc. The
commentary on case developments links back to the relevant paragraph in the main work.

The main work deals with the problems generated by those cases of insolvency (either of an individual or of a company) where the presence of contacts with more than one system of law brings into operation the principles and methods of private international law (also known as conflict of laws).

Part I of the main work is mainly devoted to an examination of the body of rules and practice that has evolved in England during the course of the past two-and-a-half centuries, and surveys the current state of the law derived from a blend of statutory and case authorities. Contrasting approaches under a selection of foreign systems - principally Australia, Canada, France and the USA - are examined by way of comparison. There are up to date accounts of the circumstances under which insolvency
proceedings can be opened in respect of debtors which are not primarily based in England, and of the grounds on which English courts will recognise foreign insolvency proceedings and give assistance to the foreign representative of the debtor's estate.

Part II of the main work explores the progress towards the creation of international arrangements to co-ordinate and rationalise the conduct of insolvency proceedings which have cross-border features, particularly where the debtor is capable of being subjected to concurrent proceedings in two or more jurisdictions. Central to the developments described in detail in this Part are the EC Regulation on Insolvency Proceedings, in force throughout the UK since May 2002, and the UNCITRAL Model Law on
Cross-Border Insolvency, which was due for enactment in the UK.

Fletcher, Ian
Ian Fletcher is Professor of International Commercial Law at University College London, appointed in January 2001. He was called to the Bar by Lincoln's Inn in 1971, of which he was elected a Bencher in 2003, and currently practises from 3/4 South Square, Gray's Inn. His principal research and teaching interests are in the fields of bankruptcy and insolvency law, commercial law, European Community law, conflict of laws, and comparative law. He is the author,
co-author, contributor and editor of many books on these subjects.