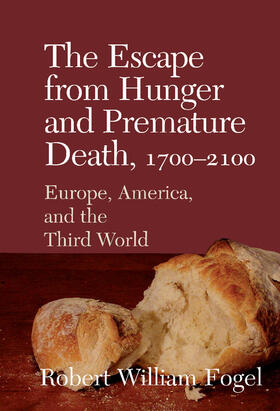 Europe, America, and the Third World

Nobel laureate Robert Fogel's compelling new study examines health, nutrition and technology over the last three centuries and beyond. Throughout most of human history, chronic malnutrition has been the norm. During the past three centuries, however, a synergy between improvements in productive technology and in human physiology has enabled humans to more than double their average longevity and to increase their average body size by over 50 per cent. Larger, healthier humans have contributed to the acceleration of economic growth and technological change, resulting in reduced economic inequality, declining hours of work and a corresponding increase in leisure time. Increased longevity has also brought increased demand for health care. Professor Fogel argues that health care should be viewed as the growth industry of the twenty-first century and systems of financing it should be reformed. His book will be essential reading for all those interested in economics, demography, history and health care policy.

List of figures; List of tables; Preface; Acknowledgments; 1. The persistence of misery in Europe before 1900; 2. Why the twentieth century was remarkable; 3. Tragedies and miracles in the Third World; 4. Prospects for the twenty-first century; 5. Problems of equity in health care; Postscript: how long can we live?; Appendix; Glossary of technical terms; Biographical notes; References.

Fogel, Robert William
ROBERT WILLIAM FOGEL won the Nobel Prize for Economics in 1993. He is the Charles R. Walgreen Distinguished Service Professor of American Institutions in the Graduate School of Business and Director of the Center for Population Economics in the University of Chicago. His numerous publications include Time on the Cross: The Economics of Negro Slavery (with Stanley L. Engerman) and The Fourth Great Awakening and the Futureof Egalitarianism.