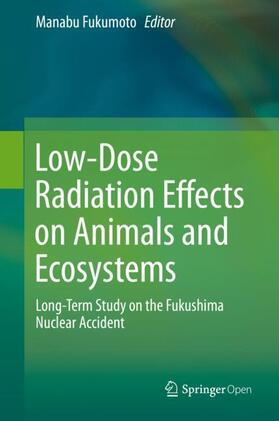 This open access book summarizes the latest scientific findings regarding the biological effects of the Fukushima Daiichi Nuclear Power Plant (FNPP) accident in 2011.

Various cases of changes in animals and organisms have been reported since the FNPP accident. However, it is often unknown whether they are actually due to radiation, since the dose or dose-rate are not necessarily associated with the changes observed. This book brings together the works of radiation biologists and ecologists to provide reliable radioecology data and gives insight into future radioprotection.

The book examines the environmental pollution and radiation exposure, and contains valuable data from abandoned livestock in the ex-evacuation zone and from wild animals including invertebrates and vertebrates, aqueous and terrestrial animals, and plants that are subjected to long-term exposure in the area still affected by radiation. It also analyzes dose evaluation, and offers new perspectives gained from the accident, as well as an overview for future studies to promote radioprotection of humans and the ecosystem.

Since the biological impact of radiation is influenced by various factors, it is difficult to scientifically define the effects of low-dose/low-dose-rate radiation. However, the detailed research data presented can be combined with the latest scientific and technological advances, such as artificial intelligence, to provide new insights in the future.

This book is a unique and valuable resource for researchers, professionals and anyone interested in the impact of exposure to radiation or contamination with radioactive materials.

Fukumoto, Manabu
Manabu Fukumoto is a pathologist, who graduated from Kyoto University, Japan. Based on autopsies of alpha-emitter Thorotrast-induced cancer cases, he has analyzed the molecular genetic carcinogenic mechanisms of internally deposited radionuclides. He has also established an archive of animals contaminated with internally deposited radionuclides from the ex-evacuation zone of the Fukushima Daiichi nuclear power plant accident and has been assessing biological effects of the accident. He served as President of the Japanese Radiation Research Society (JRRS) and a director of Japanese Pathological Society. He has received the Japanese Pathological Association Award and an Achievement Award from the JRRS for his contributions to radiation pathology.