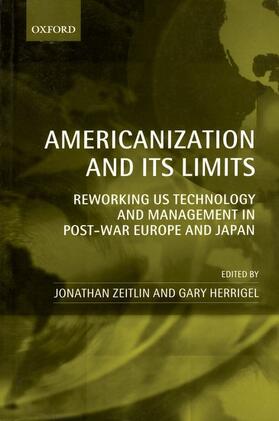 Herrigel / Zeitlin Americanization and Its Limits

Reworking Us Technology and Management in Post-War Europe and Japan

Herrigel / Zeitlin Americanization and Its Limits

Throughout the evolution of the modern world economy, new models of productive efficiency and business organization have emerged-in Britain in the nineteenth century, in the US in the early (and perhaps late) twentieth century, and in Japan in the 1980s and 1990s. At each point foreign observers have looked for the secrets of success and best practice, and initiatives have been taken to transmit and diffuse.

This book looks in detail at 'Americanization' in Europe and Japan in the post-war period. A group of distinguished international scholars explore in depth the processes, the ideologies, and the adaptations in a number of different countries (the UK, France, Italy, Japan, Sweden, Germany) and different sectors (engineering, telecommunications, motor vehicles, steel, and rubber).

The book is rich in historical analysis based on careful research. This provides the basis for informed and subtle theoretical analysis of the complexities of the diffusion of business organization and the powerful influences of Americanization in this century. It will be of compelling interest to historians, social scientists and business academics concerned with the dynamics of economic and corporate growth, industrial development, and the diffusion of productive and business models.

Herrigel, Gary
Jonanthan Zeitlin is Professor of History, Sociology, and Industrial Relations at the University of Wisconsin-Madison, where he is also a co-director of the European Union Center. He has been a consultant on industrial and labour market policy for the International Labour Organization, the United Nations Industrial Development Organization, and the Greater London Council.

Gary Herrigel is Associate Professor of Political Science at the University of Chicago, USA.