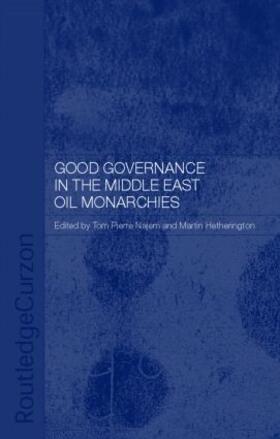 The concept of 'good governance' is of increasing importance, and is used by international organizations to ensure reasonable conformity to high standards in states which participate in the global trading regime and other international activities. This book examines the concept of good governance and how it is applied in the states of the Gulf Co-operation Council. These states are particularly important because of their strategic location and massive oil wealth. Moreover, as monarchies, in most cases without powerful democratic representative bodies, and as Islamic countries, with a different outlook from countries of the West, Western standards of good governance may need to be modified in order for them to be implemented effectively.

Introduction 1. Good Governance: The Definition and Application of the Concept 2.The States of the Gulf Co-operation Council 3. Reform from Above: The Politics of Participation in the Oil Monarchies 4. Good International Governance: Implications for Saudi Arabia's Political Economy 5. Dynamics of GCC Press-Government Relations in the 1990s 6.Climate Governance in the GCC

Hetherington, Martin
Tom Pierre Najem is Lecturer in Political Economy at the University of Durham. His research and teaching interests are in international relations and comparative politics with particular interest in international political economy, economic development, and political development (human rights and democratisation). He has written widely on these subjects, including two monographs on Lebanese politics.Martin Hetherington is Researcher in Middle Eastern Studies at the Middle East and North Africa Research Group, Foreign and Commonwealth Office, London.