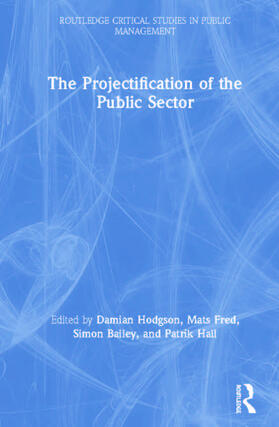 Hodgson / Hall / Bailey The Projectification of the Public Sector

Hodgson / Hall / Bailey The Projectification of the Public Sector

In recent decades, we have witnessed an increasing use of projects and similar temporary modes of organising in the public sector of nations in Europe and around the world. While for some this is a welcome development which unlocks entrepreneurial zeal and renders public services more flexible and accountable, others argue that this seeks to depoliticise policy initiatives, rendering them increasingly technocratic, and that the project organisations formed in this process offer fragmented and unsustainable short-term solutions to long-term problems.
This volume sets out to address public sector projectification by drawing together research from a range of academic fields to develop a critical and theoretically-informed understanding of the causes, nature, and consequences of the projectification of the public sector. This book includes 13 chapters and is organised into three parts. The first part centres on the politics of projectification, specifically the role of projects in de-politicisation, often accomplished by rendering the political “technical”. The chapters in the second part all relate to the reframing of the relationship between the centre and periphery, or between policy making and implementation, and the role of temporality in reshaping this relation. The third and final part brings a focus upon the tools, techniques, and agents through which public sector projectification is assembled, constructed, and performed.

Why is Innovation Policy Projectified? Political Causes in the Case of Sweden

In and Out of Amber: the New Zealand Government Major Projects Performance Reporting

Project Management in the Shadow of Public Human Services

Pilots as Projects: Policy Making in a State of Exception

Project Governance in an Embedded State: Opportunities and Challenges

The European Dimension of Projectification. Implications of the Project Approach in EU Funding Policy

Agents, Techniques, and Tools of Projectification

Observing the Process of Culture Projectification and its Agents: A Case Study of Kraków

Standardisation and Its Consequences in Health Care: A Case Study of PRINCE2 Project Management Training

The Freelance Project Manager as an Agent of Governmentality: Evidence from a UK Local Authority

Hodgson, Damian
Damian Hodgson is Professor of Organisational Analysis at Alliance Manchester Business School and Co-Director of the Institute for Health Policy and Organisation, University of Manchester, UK.
Mats Fred is a post-doctoral researcher at the Department of Global Political Studies, Malmo¨ University, Sweden.
Simon Bailey is a researcher at the University of Kent, UK. His interests are in the sociological study of medicine, organisation, learning, and policy.
Patrik Hall is Professor of Political Science at the Department of Global Political Studies, Malmö University, Sweden.