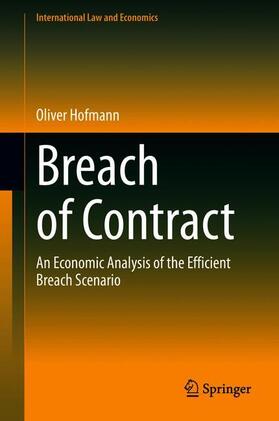 An Economic Analysis of the Efficient Breach Scenario

“Efficient breach” is one of the most discussed topics in the literature of law and economics. What remedy incentivizes the parties of a contract to perform contracts if and only if it is efficient? This book provides a new perception based on an in-depth analysis of the impact the market structure, asymmetry of information, and deviations from the rational choice model have, comprehensively.
The author compares the two predominant remedies for breach of contract which have been adopted by most jurisdictions and also found access to international conventions like the Convention on Contracts for the International Sale of Goods (CiSG): Specific performance and expectation damages. The book illustrates the complexity such a comparison has under more realistic assumptions. The author shows that no simple answer is possible, but one needs to account for the circumstances. The comparison takes an economic approach to law applying game theory. The game-theoretic models are consistent throughout the entire book which makes it easy for the reader to understand what effects different assumptions about the market structure, the distribution of information, and deviations from the rational choice model have, and how they are intertwined.

Introduction.- Breach or Perform Decision - The Traditional Model of the Efficient Breach.- Distributional Effects and the Original Contract.- The Option to Cover.- Over- and Undercompensation.- Incomplete Information.- Transaction Costs.- Conclusion.

Hofmann, Oliver
Oliver Hofmann is legal engineer and an attorney-at-law, working for Noerr LLP. He studied law at the Ludwig Maximilian University of Munich (Germany) and Stellenbosch University (South Africa). He worked at an international law firm as a lawyer (2014-2016) after completing his legal apprenticeship at the Higher Regional Court Munich (2011-2013). He was a member of the DFG-Graduate School in Law & Economics at the University of Hamburg (Germany) between 2016 and 2019 and Visiting Researcher at Yale Law School (USA) in 2017.