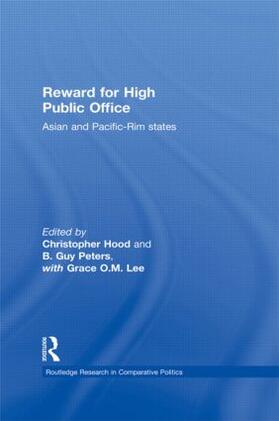 The choices made by governments about how to reward their top employees reveal a great deal about their values and their assumptions about governing. This book examines rewards of high public office in seven Asian political systems, a particularly rich set of cases for exploring the causes and consequences of the rewards of high public office, having some of the most generous and most meagre reward packages in the world.There are a range of economic, political and cultural explanations for the rewards provided by governments. Likewise, these choices are assumed to have a number of consequences, including variations in the levels of corruption and economic success.Reward for High Public Office includes case studies focusing on Australia, China, Hong Kong, Japan, Korea, New Zealand and Singapore. It will interest students and researchers of politics, public administration and Asian studies.

Nunberg, Barbara
Christopher Hood is Gladstone Professor of Government and Fellow of All Souls College at the University of Oxford. He currently chairs the Politics Section of the British Academy. B. Guy Peters is Maurice Falk Professor of American Government at the University of Pittsburgh and has published and lectured extensively in the areas of comparative public administration, comparative policy studies and European politics.