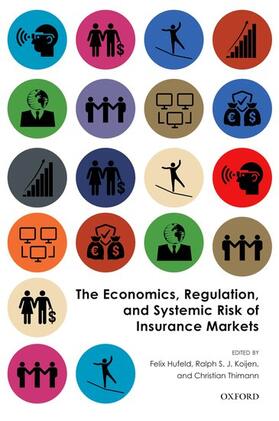 Despite the importance of insurance in enabling individual and collective social, economic, and financial activities, discussions about the macroeconomic role and risks of insurance markets are surprisingly limited. This book brings together academics, regulators, and industry experts to provide a multifaceted array of research and perspectives on insurance, its role and functioning, and the potential systemic risk it could create.

The first part discusses the macroeconomic role of insurance and how insurance is different from banking and general finance. Understanding the differences between the balance sheets of insurers and other financial intermediaries is essential for understanding the potential differences in risk nature and optimal regulation. The second part of the book focuses on the risks managed by the insurance sector and the potential for systemic risk. The chapters discuss the risks both on the asset and
liability sides of insurers' balance sheets. The third part of the book covers the impact of regulation on insurance companies. Existing regulation is often complex and has a large impact on insurance companies' decision-making and functioning. The chapters also illustrate the unintended consequences
of various forms of regulation. The book concludes with a summary of a survey that has been conducted in collaboration with McKinsey, where insurance executives have been asked about the risks and regulation in the insurance sector. The survey provides guidance for future research on insurance markets.

Hufeld, Felix
Felix Hufeld is President of the German Federal Financial Supervisory Authority (BaFin) and member of the Supervisory Board of the Single Supervisory Mechanism (SSM) for the banks of the Eurozone. Previously he was Chief Executive Director Insurance Supervision at BaFin. He was also Chairman of the Executive Committee of the International Association of Insurance Supervisors (IAIS) and member of the Management Board of the European Insurance and Occupational PensionsAuthority (EIOPA). Previously he was Partner at Westlake Partners. From 2001 to 2010 he served as Chief Executive Officer of Marsh Germany, Austria, and Northern Europe of Marsh & Mclennan Companies Inc. Prior to this he worked for Dresdner Bank as their Global Head Group Corporate Development, andfor The Boston Consulting Group (BCG). He studied Law in Freiburg and received a Master in Public Administration at Harvard University.Ralph S. J. Koijen is Professor of Finance at New York University Stern School of Business, on leave from London Business School. His areas of expertise are health and insurance markets, investments, and financial econometrics. He is also a Research Fellow of the CEPR and Netspar. Before joining London Business School, he was visiting Assistant Professor of Finance at New York University's Stern School of Business, and an Assistant and Associate Professor of Finance at the University ofChicago's Booth School of Business. Professor Koijen's research has been published in leading journals, such as Econometrica, the American Economic Review, The Journal of Finance, the Review of Financial Studies, and the Journal of Financial Economics. He has received various awards for his work includingthe Richard A. Crowell Memorial Prize, the Roger F. Murray Prize, Swiss Finance Institute Outstanding Paper Award, the Glucksman Institute Research Prize, and the Amundi-Smith Breeden Distinguished Paper Prize.Christian Thimann is a Head of Strategy, Sustainability and Public Affairs of the AXA Group and affiliated Professor of Economics at the Paris School of Economics. He is also an External Member of the French Council of Economic Advisors and an Affiliated Professor at the Paris School of Economics. Previously Dr Thimann held senior positions at the European Central Bank (ECB), including Director General and Advisor to the President from 2008 to 2013. He also served as an Economist at theInternational Monetary Fund in Washington, DC. Dr Thimann holds a Bachelor's degree from Rheinische Friedrich-Wilhelms-Universität Bonn, a Master's degree from the London School of Economics and Political Science, and a PhD from Ludwig-Maximilians Universität München.