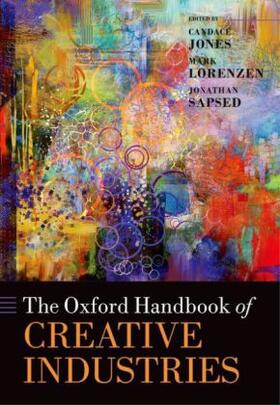 The Oxford Handbook of Creative Industries is a reference work, bringing together many of the world's leading scholars in the application of creativity in economics, business and management, law, policy studies, organization studies and psychology. Creative industries research has become a regular theme in academic journals and conferences across these subjects and is also an important agenda for governments throughout the world, while business people from
established companies and entrepreneurs revaluate and innovate their models in creative industries.

The Handbook is organized into four parts: Following the editors' introduction, Part One on Creativity includes individual creativity and how this scales up to teams, social networks, cities, and labour markets. Part Two addresses Generating and Appropriating Value from Creativity, as achieved by agents and organizations, such as entrepreneurs, stars and markets for symbolic goods, and considers how performance is measured in the creative industries.

Part Four on Creative Industries, Culture and the Economy offers chapters on cultural change and entrepreneurship, on development, on copyright, economic spillovers and government policy.

This authoritative collection is the most comprehensive source of the state of knowledge in the increasingly important field of creative industries research. Covering emerging economies and new technologies, it will be of interest to scholars and students of the arts, business, innovation, and policy.

Jones, Candace
Candace Jones is an Associate Professor at the Carrol School of Management, Boston College. Her research interests focus on cultural frameworks, cultural meaning and social structures. She is currently on the editorial review boards of Organization Science, Strategic Management Journal, Journal of Management Studies and Organization Studies, where she was a Senior Editor from 2008-2012. Professor Jones was elected Division Chair for Organization and Management
Division of the Academy of Management 2012-2015, and served as Representative at Large from 2008-2010.

Mark Lorenzen is a Professor at the Copenhagen Business School. He researches relations between innovation and economic organization in networks, projects, and clusters. Mark has published widely, convened sessions at DRUID, AOM, EGOS and AAG, raised extensive research funding and received awards for research excellence. He is editor-in-chief of Industry and Innovation and editor of Routledge Studies in Industial Dynamics. He is a member of the executive committee of the DRUID Society, is a
keynote speaker and commentator and has received CBS award for excellence in research dissemination.

Dr Jonathan Sapsed is Academic Director of the Brighton Fuse project. He is a Principal Research Fellow at CENTRIM in University of Brighton's Business School and was an Innovation Fellow of the Advanced Institute of Management Research (AIM). He has researched creativity and innovation in digital creative firms in Silicon Valley in the US, UK video games developers, as well as companies such as Sun Microsystems, Ericsson, and QinetiQ. His research is published in journals such as Research
Policy and Organization Studie