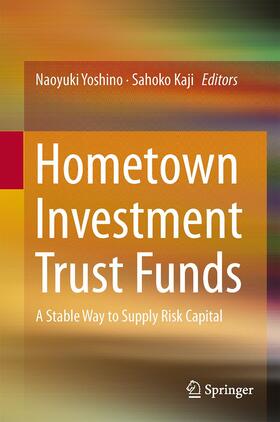 This book records the first success stories of a new form of financial intermediation, the hometown investment fund, that has become a national strategy in Japan, partly to meet the need to finance small and medium-sized enterprises (SMEs) after the devastating earthquake and tsunami in March 2011.

The hometown investment fund has three main advantages. First, it contributes to financial market stability by lowering information asymmetry. Individual households and firms have direct access to information about the borrowing firms, mainly SMEs, that they lend to. Second, it is a stable source of risk capital. The fund is project driven. Firms and households decide to invest by getting to know the borrowers and their projects. In this way the fund distributes risk but not so that it renders risk intractable, which was the problem with the “originate and distribute” model. Third, it contributes to economic recovery by connecting firms and households with SMEs that are worthy of their support. It also creates employment opportunities, at the SMEs as well as for the pool of retirees from financial institutions who can help assess the projects.

Introduction of the hometown investment fund has huge global implications. The world is seeking a method of financial intermediation that minimizes information asymmetry, distributes risk without making it opaque, and contributes to economic recovery. Funds similar to Japan’s hometown investment fund can succeed in all three ways. After all, the majority of the world’s businesses are SMEs. The first chapter explains the theory behind this method, and the following chapters relate success stories from Japan and other parts of Asia. This book should encourage policymakers, economists, lenders, and borrowers, especially in developing countries, to adopt this new form of financial intermediation, thus contributing to global economic stability.

Kaji, Sahoko
Naoyuki Yoshino is a professor of economics at Keio University. In 1979 he obtained his Ph.D. from The Johns Hopkins University; his thesis supervisor was Sir Alan Walters, Baroness Margaret Thatcher's economic advisor. Dr. Yoshino has been a visiting scholar at MIT and a visiting professor at various universities including New South Wales University (Australia), Fondation nationale des sciences politiques (Paris), and Gothenburg University (Sweden). He was an assistant professor at the State University of New York at Buffalo before he joined Keio University in 1991 as a professor of economics. His professional career includes membership on many government committees. Since 2004, he has been a director of the Institute of Financial Research at Japan's Financial Services Agency (FSA). In recognition of his wide-ranging scholarship and contribution to policy formulation, he was conferred an honorary doctorate by Gothenburg University in 2004. Dr. Yoshino was appointed as board chair of the Financial Planning Standard Board (FPSB, USA). He serves as chairperson of the JGB (Japanese Government Bond) Investors' meeting at the Ministry of Finance and as president of the Financial Council at the FSA (Japanese Government). He is a Policy Board member of the Federal Deposit Insurance Corporation of Japan and serves as chairperson of the banks' stock acquisition organization. He was selected for inclusion in Who's Who in the World in 2009, 2010, and 2011. Dr. Yoshino received the World Top 100 Educators' Award in 2009 at Cambridge U.K.
Sahoko Kaji received her B.A. degree in economics in 1982 and her M.A. in economics in 1984, both from Keio University, and a Ph.D. in economics in 1992 from The Johns Hopkins University. At Keio, Dr. Kaji has been professor of economics since 1999 and, in addition, programme co-ordinator of the Professional Career Programme (PCP) (http://web.econ.keio.ac.jp/lecture/pcp/) since 2007 at the faculty of economics at Keio. She is also a member of the Council on Customs, Tariff, Foreign Exchange and Other Transactions at the Ministry of Finance, and deputy director of the EUSI (EU Studies Institute). Her publications include 'Successful Structural Reforms after EMU', Journal of the Japanese and International Economies 12, 1998, pp. 507-534; 'What Can Countries Do to Avoid a Financial Crisis?', The World Economy, Vol. 24, No.4, April 2000, pp. 567-589; 'Economie: la décennie perdue', Politique étrangère, Janvier-Mars 2002, pp.67-90; Kokusai Tsuka Taisei no Keizaigaku (The Economics of Exchange Rate Regimes), Nihon Keizai Shimbun Publishing, 2004; 'What Greece Teaches Us about Democracy', Journal of Political Science and Sociology, V.14/P.1-16, 2011/03; Euro Kiki de Nihon wa Dounarunoka (What the Euro Crisis Means to Japan), Nihon Keizai Shimbun Publishing, 2012. Further information can be found at http://k-ris.keio.ac.jp/Profiles/60/0005959/prof_e.html.