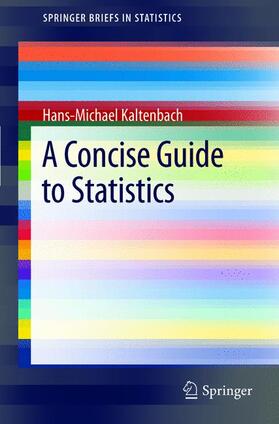 Kaltenbach A Concise Guide to Statistics

Kaltenbach A Concise Guide to Statistics

Kaltenbach, Hans-Michael
Hans-Michael Kaltenbach received his Diploma in Mathematics from the University of Hannover, Germany in 2003 with a thesis on the stochastic runtime analysis of algorithms. Then he joined the International Graduate School for Bioinformatics and Genome Research at the University of Bielefeld, where he completed his PhD in 2007 with a thesis on efficient algorithms and statistics for protein identification using mass spectrometry. In 2007/2008 he became a postdoctoral fellow at the Institut Pasteur in Paris, France, working with Benno Schwikowski on algorithms for mass spectrometry and algorithms and statistics for the analysis of biological networks. Since 2008, he has been working as a postdoctoral fellow with Joerg Stelling in the computational systems biology group at the ETH Zurich, Switzerland.