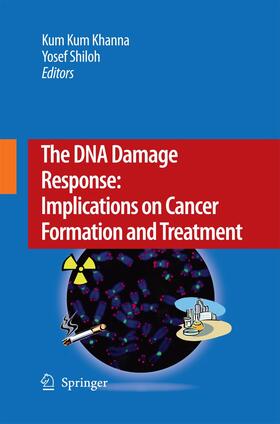 The ?eld of cellular responses to DNA damage has attained widespread recognition and interest in recent years commensurate with its fundamental role in the ma- tenance of genomic stability. These responses, which are essential to preventing cellular death or malignant transformation, are organized into a sophisticated s- tem designated the “DNA damage response”. This system operates in all living organisms to maintain genomic stability in the face of constant attacks on the DNA from a variety of endogenous by-products of normal metabolism, as well as exogenous agents such as radiation and toxic chemicals in the environment. The response repairs DNA damage via an intricate cellular signal transduction network that coordinates with various processes such as regulation of DNA replication, tr- scriptional responses, and temporary cell cycle arrest to allow the repair to take place. Defects in this system result in severe genetic disorders involving tissue degeneration, sensitivity to speci?c damaging agents, immunode?ciency, genomic instability, cancer predisposition and premature aging. The ?nding that many of the crucial players involved in DNA damage response are structurally and functionally conserved in different species spurred discoveries of new players through similar analyses in yeast and mammals. We now understand the chain of events that leads to instantaneous activation of the massive cellular responses to DNA lesions. This book summarizes several new concepts in this rapidly evolving ?eld, and the advances in our understanding of the complex network of processes that respond to DNA damage.