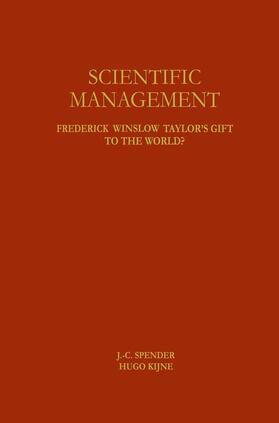 Many of those interested in the effect of industry on contemporary life are also interested in Frederick W. Taylor and his work. He was a true character, the stuff of legends, enormously influential and quintessentially American, an award-winning sportsman and mechanical tinkerer as well as a moralizing rationalist and early scientist. But he was also intensely modem, one of the long line of American social reformers exploiting the freedom to present an idiosyncratic version of American democracy, in this case one that began in the industrial workplace. Such as wide net captures an amazing range of critics and questioners as well as supporters. So much is puzzling, ambiguous, unexplained and even secret about Taylor's life that there will be plenty of scope for re-examination, re-interpretation and disagreement for years to come. But there is a surge of fresh interest and new analyses have appeared in recent years (e. g. Wrege, C. & R. Greenwood, 1991 "F. W. Taylor: The father of scientific management", Business One Irwin, Homewood IL; Nelson, D. (Ed. ) 1992 "The mental revolution: Scientific management since Taylor", Ohio State University Press, Columbus OH). We know other books are under way. As is customary, we offer this additional volume respectfully to our academic and managerial colleagues, from whatever point of view they approach scientific management, in the hope that it will provoke fresh thought and discussion. But we have a more aggressive agenda.