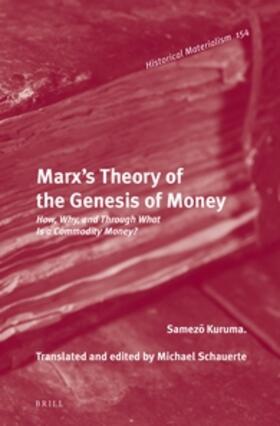 Kuruma Marx’s Theory of the Genesis of Money

How, Why, and Through What Is a Commodity Money?

Kuruma Marx’s Theory of the Genesis of Money

In this volume, Marx’s Theory of the Genesis of Money. How, Why, and Through What is a Commodity Money?, the first of the author’s works to be translated into English, Samezo Kuruma examines the different angles from which Marx analyses the commodity and money in the first two chapters of Capital, Volume I. Kuruma carefully explains each of the theoretical questions raised by Marx, particularly the theory of the value-form, which unravels the mystery surrounding money. The theoretical knowledge Marx gains from his analysis of the commodity is the linchpin of Capital, but he recognises that this presents the reader with the ‘greatest difficulty’ – just as ‘beginnings are always difficult in all sciences’. Kuruma helps to ease this difficulty by making the reader clearly aware of how and why Marx poses his theoretical questions.

This work includes an English translation of the full text of Kuruma’s book, Kachikeitai-ron to kokankate-ron (Theory of the Value Form and Theory of the Exchange Process) (Iwanami Shoten, 1957) and a slightly abridged version of Part I of Kahei-ron (Theory of Money) (Otsuki Shoten, 1979). It is a substantially revised edition of the English translation under the same title, Marx's Theory of the Genesis of Money, that was self-published by the translator (Outskirts Press, 2008).

Acknowledgements
Notes on the Text

Introduction to This Edition

2 Why is the Want of the Commodity Owner Abstracted from in the Theory of the Value Form? (A Response to the View of Kozo Uno)
Uno’s First Argument
Uno’s Second Argument
Uno’s Third Argument

1 The Questions ‘How, Why and through What’ (The Genesis of Money)

2 Riddle of the Money Form and the Riddle of Money

3 Difference between the First and Second Edition of Capital

5 In What Sense is the Simple Value Form ‘Accidental’?

6 The ‘Detour’ of Value Expression

10 What is the ‘Dialectic’ in the Case of the Value Form?