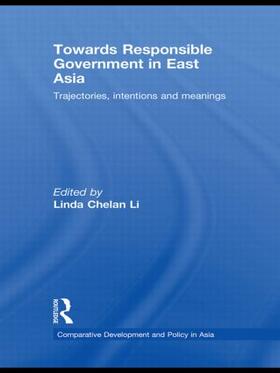 This book explores the idea of responsible government in East Asia, arguing that many recent governance crises have resulted from responsibility failures on a huge scale. It distinguishes between accountability, which it argues has been overemphasised recently, and responsibility, which it argues goes beyond accountability, true responsible government involving the actor in feeling liable for and taking responsibility for his or her actions. It shows how historically the concept of responsibility is more embedded in political discussions in Asia, whereas the concepts of democracy and accountability are more embedded in the intellectual traditions of Europe, but that the challenges of revolution and post-revolution, decolonization and post-colonization and neo-liberal globalization have complicated matters. Drawing on a wide range of case studies from East Asia, and relating the concepts discussed to political theory, ethics and social psychology, the book shows how actors in government and society interact to deliberate, produce or distract from the practice and perception of “responsible government”, and suggests how the concept of “responsible government”, better defined, might be encouraged to produce better governance.

Introduction: Towards and Away from Responsible GovernmentLinda Chelan Li 1. The Genesis of Responsible Government under Authoritarian Condition: Taiwan during Martial LawTak-Wing Ngo and Yi-chi Chen2. Contractual Thinking and Responsible Government in China:A Constructivist Framework for AnalysisChengxin Pan 3. Dual Dimensions of Responsibility: The Internal Disciplinary Regulations of the Chinese Communist PartyTing Gong 4. Failing to Treat: Why Public Hospitals in China do not Work?Waikeung Tam 5. Working for the Peasants? Strategic Interactions and Unintended Consequences in the Chinese Rural Tax Reform Linda Chelan Li 6. Whose Responsibility? The Marginalization of Personal Responsibility and Moral Character Ho Mun Chan 7. In Lieu of a Conclusion Daniel Bell. Bibliography. Index

Li, Linda Chelan
Linda Chelan Li is Associate Professor in the Department of Public and Social Administration, City University of Hong Kong. She specializes in intergovernmental relations and political economy in China. She is Founding Fellow of the (former) Centre for Research on Provincial China in Australia and member of the Editorial Board of the journal, Provincial China. She had an early career with the Hong Kong government and several Legislative Councillors, and has been a regular commentator on local and Chinese politics in the local and international media.