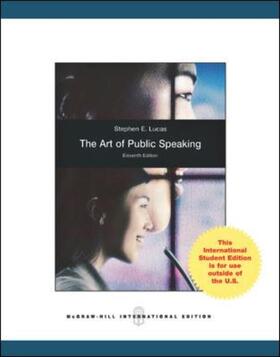 The Art of Public Speaking 11e continues to define the art of being the best by helping today’s students become capable, responsible speakers and thinkers. With a strong focus on the practical skills of public speaking and grounded in classical and contemporary theories of rhetoric, The Art of Public Speaking offers full coverage of all major aspects of speech preparation and presentation. Utilizing the full suite of resources, students learn to internalize the principles of public speaking, build confidence through speech practice, and prepare for success in the classroom and beyond. With the new Enhanced Speech Capture in Connect Lucas, instructors now have the ability to evaluate live speeches using a customizable rubric in the classroom. Instructors may also upload speech videos on students’ behalf to create and manage true peer review assignments. With its ground-breaking adaptive learning system, Connect Lucas™ also helps students “know what they know,” while guiding them to experience and learn important concepts that they need to know to succeed. With McGraw-Hill Create™, instructors can now customize their Lucas 11e textbook to the section level, selecting and arranging only the sections covered in the course. The new Create system will automatically repaginate and re-number chapters, sections, graphs, and illustrations, based on how the instructor chooses to arrange them. This deep level of customization guarantees that students pay only for the content covered in the course.

Lucas, Stephen
ABOUT THE AUTHOR Stephen E. Lucas is Professor of Communication Arts and Evjue-Bascom Professor in the Humanities at the University of Wisconsin-Madison, where he has taught since 1972. He received his bachelor's degree from the University of California, Santa Barbara, and his master's and doctorate degrees from Penn State University. Professor Lucas has been recognized for his work as both a scholar and a teacher. His first book, Portents of Rebellion: Rhetoric and Revolution in Philadelphia, 1765-1776, received the Golden Anniversary Award of the National Communication Association in 1977 and was nominated for a Pulitzer Prize. His major articles include "The Schism in Rhetorical Scholarship" (1981), "The Renaissance of American Public Address: Text and Context in Rhetorical Criticism" (1988), "The Stylistic Artistry of the Declaration of Independence (1990), and The Rhetorical Ancestry of the Declaration of Independence (1998), for which he received the Golden Anniversary Monograph Award of the National Communication Association. His most recent book is Words of a Century: The Top 100 American Speeches, 1900-1999 (2009). Professor Lucas has received a number of teaching awards, including the Chancellor's Award for Excellence in Teaching at the University of Wisconsin and the National Communication Associations Donald Ecroyd Award for Outstanding Teaching in Higher Education. His lecture course on "The Rhetoric of Campaigns and Revolutions" is among the most popular on campus and has twice been selected for statewide broadcast in its entirety by Wisconsin Public Radio. Professor Lucas is featured in the Educational Video Groups program on the history of American public address, and he has appeared on the History Channels documentary on the Declaration of Independence. Professor Lucas has directed the introductory public speaking course at the University of Wisconsin-Madison since 1973. Over the years he has been responsible for numerous teaching innovations and has supervised the training of hundreds of graduate assistants. In addition to participating in public speaking workshops and colloquia at schools throughout the United States, he has served as a judge for the major national English-language public speaking competitions in China, has lectured at numerous Chinese universities, and has conducted workshops for Chinese instructors on teaching public speaking. Stephen Lucas and his wife, Patty, live in Madison, Wisconsin, and have two sons, Jeff and Ryan. His interests include travel, sports, art, and photography.